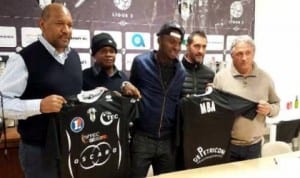 Sunday Mba (3rd right) being unveiled by Bastia at the weekend

An ex-international, Waidi Akanni, yesterday said that Coach Stephen Keshi’s fighting spirit would spur the Super Eagles to greater height at the championship of Africa Nations (CHAN) in South Africa.

Akanni, a former Green Eagles defender in an interview with newsmen in Lagos, said the home-based Eagles had what it takes to win the championship.

He added that he was optimistic that the team would go far in the tournament based on their performance at the friendly match against the Walya Antelope of Ethiopia last Saturday in Abuja.

“I think the boys gave a good account of themselves, they won 2-1, which is not bad, they will get better.

“Playing with the Ethiopia side gives us an idea of what to expect at the tournament.

“The tournament will help Keshi to pick more of the boys for his World Cup team too.

“Keshi’s winning spirit will help the team. I expect him to pick the best players for the World Cup,” Akanni said.

He said that with the World Cup near, many of the players would put in their best to make the final list to Brazil.

The Eagles will confront host South Africa in Group A alongside Mail and Mozambique in Cape Town.