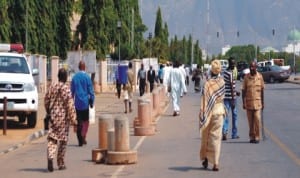 Workers resuming from New Year holiday at the Federal Secretariat in Abuja, yesterday.

Marine transport operators plying the Rivers State Capital, Port Harcourt, to other riverine communities of the state and neighbouring Bayelsa State have beaten their chests that there were no major marine casualties that involved loss of lives during the Christmas and New Year celebrations.

Some officials of the boat operators who spoke with The Tide correspondent said despite the rush and crowd of passengers, they did not increase the transport fare, in order to enable their commuters travel to the country side and enjoy the yuletide with their loved ones.

Deinbo Davids, chairman of Maritime Workers Union of Nigeria (MWUN), Abonnema Wharf Unit, said that they were not tempted to increase the transport fare in spite of the large number of passengers during the Christmas and New Year period.

Davids also hinted that there was no incident of boat capsize or sea pirates attack, and gave thanks to God for the safety of lives and property of their passengers.

His counterpart at Nembe Waterfront, Comrade David Teke also disclosed that there was no increase in transport fare to some Bayelsa State communities, although they experienced low patronage during the season.

“There is no cause for alarm as there was no report of incidents from our boat drivers,” he said, but reiterated his earlier appeal for JTF patrol boats on the seas to curb the activities of sea pirates and armed robbers.

Chief Sunday Opeye, the chairman of Okrika Speedboat Owners Association, however noted that although there was no increase in fares, but four of their boats were involved in minor accidents as the water hyacinths, pure water packets and other dirt that were thrown into the river caused the boats to capsize.

Opeye said only one person was injured as a result of the boat collapsized and further appealed to the government for the clean-up of wrecks along the waterways as well as check the indiscriminate packing of tugboats and other marine vessels at Abonnema waterfront, which he said is posing a great danger to marine boat operators in the area.

Also commenting, the Beach Master, Bonny Marine Transport Association, Mr Henry Jumbo said they still collect N1,500 as transport fare to Bonny and its neighbouring communities, but expressed dismay that within December last year, Sea Pirates operated on the sea route and took the boat with their occupants to a mangrove and carted away their belongings both cash and handsets.

Jumbo appealed to the authorities to beef-up security on the sea to forestall further occurrence and ensure safety of passengers’ lives and property. Generally, The Tide correspondent gathered that there were no serious boat mishaps or sea piracy during the yuletide season.