BobManuel, the Amayanabo of Abonnema had reportedly expressed satisfaction with the way President Goodluck Jonathan was handling the Soku oil wells’ dispute between Rivers and Bayelsa states.

He expressed this position when Bayelsa State Governor, Seriake Dickson visited him in Abonnema.

He said the response by the Abonnema monarch conflicted with his government’s efforts and Kalabari people’s desire to ensure that resources of the state were not whisked away to other states.

“There is an attempt by the Federal Government to undermine the development of Rivers State. I did enumerate the fact that, everybody is talking about Soku oil wells but, there’s also Etche where they took 41 oil wells from Rivers State and passed onto Abia. They want to impoverish Rivers State, and I can’t be governor and you expect me to keep quiet. So, not just Soku alone, it is also the fact that they have taken the oil wells in Etche.

“I hear my colleague, the Governor of Bayelsa State came to Abonnema the other day and the Amanyanabo of Abonnema received him and said he was satisfied with the way the president is handling the oil wells (dispute).  For me, that is a betrayal of his people and he is suppose to be a king in Kalabari Kingdom; and he said he is satisfied that the Federal Government has taken the oil wells and that Bayelsa is receiving the money.  A king in Abonnema is saying he is satisfied. It is not about me, it is about the Kalabari people. It is about the Rivers people.

He recalled that he held several meetings with the president on resolving the Soku oil wells’ dispute, but that the president’s unwillingness to act on the issue without bias collapsed the negotiations.

He vowed to protect and defend the interests of the people in Soku as well as those in other parts of the state.

“The question you should ask is that, is it correct that the oil coming from Soku have been appropriated by the Federal Government and given to Bayelsa? I have been saying this for the past two years, why haven’t they denied that?  There is nothing that I have said that they have responded to. Instead of responding to it, they will be abusing me. Is it a lie that they took Soku oil wells to Bayelsa? Is it a lie that they also took the 41 oil wells from Rivers to Abia?”, he queried.

“Now, in their submission in court and the letter they wrote Rivers State Government, they did acknowledge that it was a mistake that in the course of the drawing of that map, they drew Soku into Bayelsa, and then we complained against it because it was sent to us to review and make our submissions. Our response was ‘no, no, you have made a mistake.”

“You have just taken our community into Bayelsa. They replied that they have already released this map and that it is unfortunate that they have and it was a mistake that they would correct in the subsequent edition.  And they have not been able to make that correction, and when they say they want to invite us to a meeting, I say ‘what are you inviting us to a meeting for? You have already acknowledged that there was a mistake, go and correct the mistake.  If Bayelsa has any complaints, then put the complaints on the table after you have corrected it.” 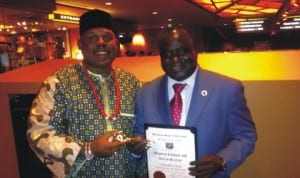 Dr James Walls Mayor of Maryland and the President of US Mayors’ Conference presenting award to DG NAFDAC, Dr. Paul Orhii at a ceremony in Milwaukee, USA