Christmas and New Year celebrations are here again and everybody is feeling the excitement and catching the fun this season offers.  Although, Port Harcourt, the Rivers State capital has been agog with series of festivities  in the last few years starting from the centenary celebration of Port Harcourt City, to CARNIRIV and now Christmas and New Year celebrations  is celebrated as a special season in human existence.

Apart from marking the birth of Jesus Christ, beyond the Christain sphere, people celebrate Christmas as a special time when families friends and relatives embark on holidays or visits and exchange gifts and goodwill.

This years celebration is not an exception as the ever busy  roads and streets of the of the city of Port Harcourt as most of the residents have travelled out.

Our investigations reveal that this years Christmas and new year celebrations seem to be most celebrated in the rural communities, towns and villages were majority of the city dwellers have returned to, this has increased the population of the communities this period with it is equally an increase in the tempo of celebration, fun and merry making.

However, in these towns and villages, beach parties and carnivals of all sizes and standards dominate the yuletide celebration most of these carnivals, such as the Buguma beach carnival, Okrika beach party etc attract international artistes and comedians, some parade local artistes, while others made do with studio Djs.

Fireworks, popularly known as “Knock out” or “banger” is another event that dominate the celebration.  The shooting is not only a continuous exercise, but the defeaning sounds of these knockouts can be heard from every nooks and crannies of the communities creating an impression of a communal war. Surprisingly most of the people including adults seem to be enjoying it.

According to a community chief from the Ibaa community in Emohua Local Government Area (EMOLGA) Rivers State, who pleaded anonymity shooting of knockout is a universal practice during Christmas and new year celebration.

There cannot be a valid celebration without it, it has become part of the culture this time of the year, infact, knockout is synonymous with Christmas and new year celebrations.

It was also observed that the once popular street parties that dominated Christmas and new year celebrations in most streets of Port Harcourt and villages seems to have been abandoned this year  as only few street parties were held.  Most of the organisers of the beach parties who were international on the issue adduced reasons why beach parities were prepared this year.

According to them, beach parties prevent prying eyes of parents most of whom come to the street parties to chase away their daughters, so the beach parties provide more privacy, enough space to dance and catch fun as well as averts the various restrictions that most communities and government place in street parties.

Apart from the beach parties, cultural displays, masquerade dances also played prominent roles in the festivities as well as football matches, wrestling contests and other side attractions.

While the villages bubbled with festivities, the few residents of the city who could not travel out also had fun in the numerous existing spots and locations in the city including amusement and the thence parks where parents, Children and families visit to unwind with great supply of toys, amusement related devices and games.

Cinemas such as the Silverbird Cinemas and Genesis De Luce Cinemas located at former Obiwali Cultural centre, Abonnema Wharf road and Tombia Street respectively are another beautiful place where families and loved ones visit.  Apart from visiting the cinema for movies, there are special booths and spots around most cinema houses that offer a number of services, foods and drinks.

Bars and lounges also add to the fun of the season especially as visitors are offered lots and loads of music with variety of drinks and fun, while for the flight crawlers, Night life in Port Harcourt this period and always is unique, vibrant and explosive wherever one finds, himself, he is sure to enjoy the infectious rhythm and beats of the clubs and bars.

In Port Harcourt, loads of musical shows have also been organised in various parts of the state capital at different times and places to entertain people this yuletide. It provides a beautiful avenue for families, friends and lovers to share pleasant times together.

There are also children shows and funfair children are the most excited people during Christmas and new year celebrations as it provides them the opportunity to visit relatives enjoy the holiday, have access to plenty food and drink, stay at home with parents and visit fun grounds.

In all, this years celebration is rated one of the best in recent times as it was not only celebrated under a peaceful atmosphere.

It was the centenary Christmas celebration with lot of glamour and fun fair it is therefore a historic Christmas for the people of Rivers State. 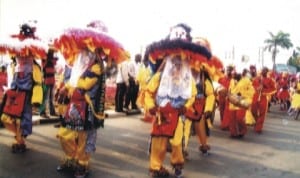