Often times, patients were turned back, sent to private hospitals or left to their own fate at the gates and corridors of health facilities, reason being that they could not afford to attend private clinics or be flown abroad, which the elite resorted to.

Strike actions, it would seem were a way of life for medical doctors and other health professionals, because they could always find reason to go on strike would seem.

However, the health unions insist that their actions were for the good of all Nigerians.

Chairman of Nigerian Medical Association, Rivers State, Dr. Ibitrokoemi Korubo, said “we are not angling for better pay, were it would not be done for that, we wont even go to work at all.

We are pushing for improved equipment, funding of hospitals and manpower development”.

Dr. Korubo pointed out that the Nigerian government needed to live up to its responsibility and support the development of the health sector.

The NMA boss observed that doctors were working round the clock to provide improved services to their patients and added that doctors have made landmark break through in medical science.

“Doctors in Nigeria have done very well, we have had two cases of cure for sickle cell by Nigeria doctors without help from any foreign doctors, we’ve successfully done heart transplant despite our challenges”, he said.

He noted that for any meaningful development to take place in any society, its population must be healthy, “without a healthy population, social insecurity and crime would increase”, he added.

He further said, “we want equal opportunity for all Nigerians, if a Commissioner can travel abroad for a headache, the common man should be able to that as well, otherwise we want a law that abolishes overseas referrals”.

He continued, “we should have a law where if you serve in government, you cannot go abroad for medicals. Everyone should have equal opportunity”.

On professional disharmony, he said “we know what the health structure should be, we have other health professionals, the Nurses pharmacists, laboratory scientists and others who help us achieve our goals, and the health hierachyal structure is clear, so we should not have a health sector that is different from practices else where”.

He appealed to the public for their trust saying, “we want the public to trust us, this is not about us and if the federal government does not come up with solutions that meet our demand, come next Monday, January 6, 2014, we are embarking on a full scale strike action”.

“Our issues are clear”, he added.

The year 2013, began with a strike action in the health sector and closed with yet another strike between December 18 to December 22, 2013.

Sadly, it seems 2014 would again open with a strike action if the NMA makes good its promise. 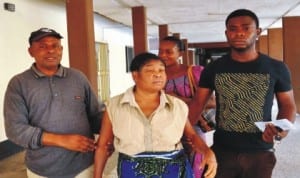 Mr Augustine Umhenin (left), helping his wife out of the University of Abuja Teaching Hospital as doctors begin warning strike in Abuja, recently.With them is the son.