Rivers State Deputy Governor, Engr Tele Ikuru, says the family unit is key to achieving a peaceful society that will engender growth and development of the nation.

Represented by the Permanent Secretary in his office, Evangelist Eddy Oloko, the Deputy Governor pointed out that “the family is the social unit that gives birth to the nation. The family has a role to play in nation building. If families know their role in character molding, we will not be faced with the challenges of social vices in the society”.

Congratulating the newlyweds on their successful wedding, Engr Ikuru charged them to “effectively raise their children morally, so as to achieve a peaceful nation,” stressing that “it is the only way we will have a peaceful nation.”  “This is important because if we do not have peace and harmony in the society, government would be constrained to pursue its policies geared towards the growth and development of our country”, he added.

Earlier, in his sermon, the guest preacher  Reverend Mieadonye Kunu, encouraged the groom to find satisfaction in his wife and the wife in her husband, warning, “there will be problem if you fail to allow her to satisfy you”.

He urged young people to refrain from indulging in pre-marital sex, admonishing, “All you need is to wait on the Lord and zip up. Wait for your time and shun pre-marital sex”.

Also, Wife of the Rivers State Deputy Governor, Dr Mina Ikuru, has called on married couples to put their trust in God in order to succeed in their marriages.

Dr Ikuru said this during the wedding reception in honour of former Ujama Wilcox, niece to the State Deputy Governor, and Mr. Samuel Ogbeiwi, where her husband, Engr. Tele Ikuru, was in attendance, in Lagos.

She noted that the challenges inherent in marriage are many and demanding that it will take only God’s grace to surmount them, pointing out that the basis of any successful marriage is dependence on God.

Dr Ikuru urged the couple to heed the counsel of God’s ministers and their parents, stating that these will help them chart the right path in their marital life.

Earlier, the Chairman of the occasion and Deputy National Chairman of the Peoples Democratic Party (PDP), Prince Uche Secondus, urged the newlyweds to “allow God’s wisdom to guide you so that God’s will, may be done in your life”.

He noted that “marriage is the realization of God’s will in the life of a couple,” maintaining that “couples need God’s grace to fulfill God’s will in their marriage,” observing that to “sustain a marital relationship is very challenging though He has made it to be enjoyed,” enjoining them to depend on God always. 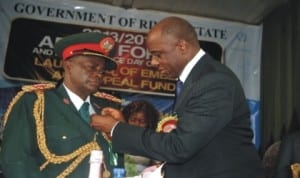