The All Progressives Grand Alliance (APGA)  is in fresh crisis over the nomination of chairmanship and councillorship candidates for the local government election.

Against this development, most of the affected aspirants have resolved to disrupt the exercise or support candidates of the All Progressives Congress (APC) and those of the Peoples Democratic Party (PDP).

They accused the National Chairman, Victor Umeh, of imposing candidates on the party and also alleged that most traditional rulers in the state were compensated with counsellorship candidates of their choice against those that actually emerged as candidates in the said primaries .But, in defence of the National Chairman, the state chairman of APGA, Mike Kwentoh, who spoke with reporters, dismissed the allegation, contending that the party followed all due democratic process during the primaries.

Kwentoh also described those claims as the allegations of bad loses, who instead of being loyal to the party, are out to cause crisis.

Also affected in the alleged change of list, are some council areas where consensus candidates emerged and agreements signed by all aspirants, only for the leadership of the party to impose another candidates in those wards and council areas.

In Awka North and South Council areas, most councillorship candidates allegedly had their names changed by a High Chief and title holder, who is also a businessman, to the chagrin of most party loyalists.

Most wards in the two council areas had their names change in areas primaries took place, while other areas, the Awka High Chef allegedly merely drafted list of councillors and submitted to the party.

In Awka North Council Area, where eight aspirants agreed on a consensus candidate and agreements made to the knowledge of Governor Peter Obi and Victor Umeh, John Ifechukwu Nwokoye, who emerged as chairmanship candidate was later changed with Cosmos Okonkwo, who it was discovered, is candidate of former Commissioner for Agriculture, Goddy Ezenagu, who was part of the signatories to the consensus agreement.

The resolution of Awka North APGA stakeholders and executive that Nwokoye as consensus candidate, was signed by Ezenagu, Sabastin Okoye, and Commissioner for Environment Transition Committee Chairman, Casmir Ilonwa and Shedrack Anakwe, as stakeholders.

Also affected are council areas in Anambra North Senatorial District, where the APGA Governor-elect, Willie Obiano, comes from; and it was gathered that Obiano had expressed his unhappiness over what he called unfairness, but was asked to shut up permanently in his own interest. 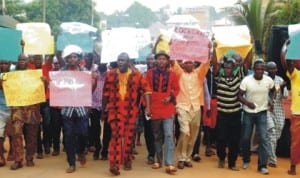 Youths from Ezinano community of Awka protesting the alleged sale of their land by land speculators in Awka, yesterday.