The new Managing Director of the Niger Delta Development Commission (NDDC), Mr. Dan Abia, said the reason behind the abysmal performance of the commission was the lack of team work.

Abia stated this last Wednesday at the Port Harcourt International Airport, Omagwa, on arrival from Abuja to resume duties.

He admitted that the past management of the commission had not the expectations of the people of the Niger Delta region and Nigeria at large due to lack of team spirit.

He reiterated the determination of the new management to get it right and expressed gratitude that President Goodluck Jonathan found them worthy to steer the leadership of the commission.

On the advice of Mr. President to complete all ongoing projects, the NDDC boss, said the advice had given them additional motivation to perform, pointing out that, “the advice is not a political talk, I want to assure you that we will carry out the directive”.

“We are honest enough to admit that so far the commission has not met the expectations, we will work as a team, I emphasis team work because part of the problem for not meeting expectation was the lack of team work”, he said.

The NDDC boss assured the people of the region and the President that the present management would work in close collaboration with the board and government of the Niger Delta States.

Abia promised to revisit the regional master plan which was the road map for the development of the region, stressing that the new leadership would do its best to justify the trust reposed on them. 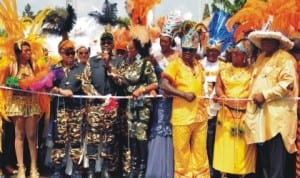