The House Committee on Water Resources has expressed shock that dam projects worth more than N1 billion across the country have been abandoned.

The Chairman of the committee Alhaji Aliyu Pategi, made his feeling known during the committee’s oversight visit to the Upper Benue River Basin Development Authority headquarters in Yola.

Pategi, representing Pategi Federal Constituency, described the development as a catastrophe and setback to the ongoing national programmes to ensure adequate water supply and food security.

”We are in Yola, the headquarters of Upper Benue River Basin Development Authority for oversight visit.

“We have visited several river basin development authorities in the country and what we discovered was unfortunate and unacceptable.”

According to him, during the inspection tour, the committee found out that those big and small dams’ projects meant for water provision and irrigation worth over N1 billion were abandoned in many parts of the country.

He noted that some of the contracts were awarded 10 years back and up till date, the contracts had not been executed while the money had been paid.

Pategi said that during the visit, the committee had also uncovered several inappropriate implementations of water projects across the country, with a high degree of embezzlement of public funds.

“It is a disgrace to Nigeria that in 2013, there are still people who have no access to potable water while hundreds of billions of naira were sunk in various dam projects  without a positive result to show.’’

He said it was the constitutional mandate of the committee to monitor and investigate the implementation of water resources projects across the country and how the funds were utilised.

The chairman gave an assurance that the committee would not be hesitated or intimidated in correcting the anomalies found affecting the smooth implementation of national water resources and development projects.

Earlier, Alhaji Aliyu Jijiwa, the Managing Director of the Authority, said the river basin received N3 billion for 2013 capital projects and that the money was spent appropriately under the Federal Government’s Expenditure Act. 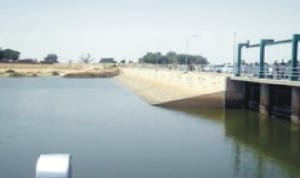 One of the abandoned Dam projects in the country