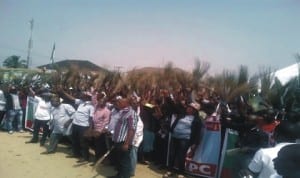 A cross section of former PDP members who crossed over to APC in Opobo Town, recently.

South-South Interim Chairman of the All Progressives Congress (APC), Chief Tom Ikimi says contrary to views, the party is making in-roads in the Niger Delta and would soon capture the region.

Chief Ikimi  made the observation during a political rally organised by Save Rivers Movement at Liberation Stadium, Port Harcourt, recently.

According to Ikimi, “It’s clear that in the present democratic dispensation, we now have a true hallmark of a party”.

For the former Minister of External Affairs, with Rivers and Edo States in APC, it was now easy o capture Delta, Cross River and Akwa-Ibom States, including Bayelsa State.

He said those claiming to be leaders of the South-South in the Peoples Democratic Party (PDP) should know that time was up for them.

The Edo State-born politician therefore congratulated Rivers people for showing courage by supporting their governor on his defection to APC.

Announcing the new Interim Executive Council of the APC in Rivers State, Chief Ikimi together with the Interim National Chairman handed over party flags to the party executives.

Meanwhile, Interim National Chairman of the APC, Chief Bisi Akande has called on Rivers people to ensure that PDP was dead in the state.

He expressed happiness that top members of the PDP had left to join the APC in the quest to wrest Nigeria from poor leadership.

Impressed by the huge crowd that participated in the rally, Former Head of State and Leader, Muhammadu Buhari said he was sure PDP was losing the 2015 elections to APC.

Buhari assured party faithfuls that he was sure APC would bring about change and urged the citizenry to work towards a united and strong Nigeria.