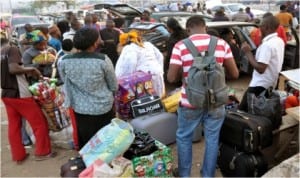 Governor Chibuike Amaechi has raised alarm over threat to his life, hinting that his name maybe top on the list of an alleged killer squad as revealed by former President Obasanjo in a letter to President Goodluck Jonathan on December 2, 2013.

Amaechi made the revelation while speaking at a political rally organised by the Save Rivers Movement and attended by top national leaders of All Progressives Congress(APC) on Monday at Liberation Stadium, Port Harcourt.

The governor said, “I am number one on the(President Jonathan’s watch) list (as alleged by former President Obasanjo). They want to kill me but they have no God. The God we worship will fight for us”.

Amaechi, who had been expected by the huge crowd to declare for the APC, however, said he would declare at the appropriate time.

Today, am not declaring. I said I will declare at the new stadium. The reason for gathering today for APC rally is to remind Nigerians that the current Federal Government is carrying on with impunity. There is no rule of law in Nigeria, no rule of law at all “, Amaechi said.

He further charged the people to be steadfast as the road to their liberation will be rough but assured that at the end of the day, victory will come.

The governor reiterated his call on the Federal Government to sign off World Bank and Africa Development Bank loan for water provision in the state, warning that the Minister of Finance, Dr Ngozi Okonjo- Iweala was endangering the lives of Rivers people by sitting on the loan.

Assuring of better governance by the APC if voted in 2015, the governor said, “let me tell you the metaphor of the (APC) broom. The metaphor of the broom is that it sweeps out dirt. Now when it is sweeping, you must bend down, you must suffer a bit and in suffering, you will be sweeping. When you finish suffering and you come back, the house will be clean. That is the metaphor of APC Broom. Prepare to suffer under the current government but come 2015, things will get better”.

Earlier, Interim Chairman of the APC, Bisi Akande expressed appreciation to all party faithful in the state including members of the National Assembly for embracing the party.

Also, Gen. Muhammadu Buhari emphasized that although the party is composed of Nigerians from different ethnic and religious backgrounds, they are united in the common pursuit of the collective good of all Nigerians.

On his part, former governor of Lagos State and leader of the party, Asiwaju Bola Tinubu commended Governor Amaechi for his “courage, his achievements and strong determination to liberate Rivers from the shackles of oppression, mismanagement and misgovernance”.

Tinubu continued, “We thank you Rotimi Amaechi becuase without your courage, without your determination without your perseverance, without degree of honesty and the confidence level you have, we will not be witnessing APC rally today in Rivers. You are no chicken, you are an eagle”.

The Pan-Niger Delta Forum (PANDEF) has said the interest of the South was to ensure that the country became an egalitarian nation where everyone was treated equally.
The National Publicity Secretary of PANDEF, Hon Ken Robinson, who said this in Port Harcourt, yesterday, described as unfortunate the claim by ACF that the south was trying to trigger war in the nation.
Robinson maintained that the northern leaders were inconsistent with their view about the nation, regretting that ACF was shield the misdeed of the criminal elements from the North.
He said, “It is unfortunate that the ACF is not consistent. Few days ago I heard they said they were trying to reach out for dialogue and then the next day they are saying the southerners are trying to trigger war, how?
“We are insisting that some wrongs and attitude that are not acceptable should stop. What the South is asking for is that we have to be a country let’s be a country.
“Let’s be a country where everybody is treated as citizen of the nation. Not a situation where some people are super citizens and others lesser citizens that is the attitude we see every day.
“People who carry guns, invade farms and destroy livelihoods molest women, kill people are treated as super humans, and then the southerners are saying no and resisting that kind of attitude and the North begin to brand southerners as people who threaten people for war.
“No one is afraid of war. If that is what they want let it be so. All we are saying is that Nigeria is no longer a country as it is.
“There is so much injustice and discrimination. The Muhammadu Buhari administration has worsened the whole thing. This is glaring in appointment and project execution and all of that. Let there be a change in attitude that is all we are saying. Let us have an egalitarian nation where everybody will be treated equally.
“Where we produce resources and we get little. You plunder our resources. The NNPC has become as some have said it Northern Petroleum Corporation, it has become a grazing ground for a section of the country with the exclusion of those whose land the industries are being operated and you say this is asking for war. This is ridiculous!
“That is a very irresponsible statement. We are patriots; that is what we are. We have contributed so much for the development and sustenance the country. Nobody will build his house and would want to destroy it, but if you think that I will build a house and you would want me to leave it and become a tenant in the house that I built, you are the one looking for war.”