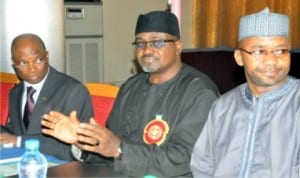 He made the assertion yesterday while speaking through the State Commissioner for Health, Dr. Sampson Parker at the graduation ceremony of 150 youths who completed training in computer (ICT), welding and fabrication in Port Harcourt and were given Starter Packs.

Amaechi held that it was wrong for people to criticize his administration for not sharing money unlike previous administrations, saying fund put into the free medicals and schools have saved families from unnecessary expenses.

He said, “By the free Health Care, the government has paid for so many expenses for you. The government of Rivers State has paid about N2,000 into your pockets monthly.”

The Rivers State governor further stated that government has over the years reduced youth restiveness and militancy by ensuring that it provides employment and free education.

“We in this government believe we will send the money to build life and not to take life.

Amaechi, therefore, charged the beneficiaries of the empowerment programme to utilise their training and packs given to them, to impact positively on society.

Earlier in his remarks, Commissioner for Youth Development, Sir Owene Emeka Wonodi said the scheme is among the various programmes organised by the state government to reduce youth unemployment and other forms of social vices.

Sir Wonodi believed that when youth were adequately provided the right environment, they would thrive and contribute to national development.

He disclosed that about 150 young persons were chosen to learn skills in welding, Computer (ICT) and fabrication and were subjected to rigorous training, adding that the starter packs were aimed to supporting them grow in the trades.

One of the trainees, Comrade Ogbonna Chukwuemeka Prince, commended the state government for the programme, as he expressed appreciation to the entire team of trainers.

Comrade Chukwuemeka promised that they will utilise the machinery given to them to generate more employment in the state.