Reacting to the recent exchange of open letters between Jonathan and Obasanjo, Alamieyeseigha  told newsmen in Yenagoa  that even though the motive for making the letter public was unclear, the issues raised were weighty and should not be ignored.

”The advice through a letter to President Jonathan no doubt is coming from a respected person who has ruled the country both as a military head of state and a two-time president of a democratic government.Yes, we can concede to him. He has the in-depth knowledge of governance, he has seen it all, and so a letter coming from him should not be taken on the face value,’’ the former governor said.

He noted that leadership and nation-building were collective responsibilities that required the input of various stakeholders to move the country forward.

“President Jonathan is not a super human, so if the country is drifting in the eyes of objective and patriotic persons in the country, they can come out and proffer solutions after identifying the problems,’’ he said.

He said President Jonathan had achieved a lot in his administration and should be encouraged to do more.

“You should know that President Jonathan must step on some toes for him to achieve success in the reforms he is embarking on.He has done certain things that only courageous people can do. The pains for the ultimate realisation of the Nigerian dream can only last for a while. We must concede that at least Jonathan has achieved some great feat, and therefore needs our collective support to do more,” he said. 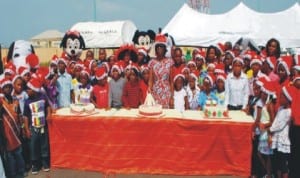 Wife of Delta State Governor, Mrs Roli Uduaghan with children at the Christmas party for children in the State in Asaba, last Monday.