The Enugu State Waste Management Agency (ESWAMA), says it has prosecuted more than 18,000 persons who flouted various environmental laws between January and December 2013.

The Managing Director of the agency, Mr Dom Okonkwo, made this known in an interview with newsmen in Enugu recently.

Okonkwo said that the defaulters committed offences ranging from improper waste disposal, burning of dumpsters to non-payment of sanitation bills.

He said that the Environmental Protection Court set up by the state government imposed various fines on the offenders.

The managing director expressed regret that out of the 250,000 demand notices issued to residents of the state for payment of bills, only 30,000 paid willingly while 15,000 paid under compulsion by the agency.

Okonkwo said that the agency would commence intensive debt recovery in January 2014 and urged residents who had not paid to do so or face the wrath of the law.

He said the agency had taken delivery of three 25-tonne tippers from the government and was expecting additional 1,500 dumpsters, two pay loaders and two bulldozers by February next year.

The managing director, however, warned residents of the state against bush and waste burning during this dry season, to avoid fire disaster.

Okonkwo also appealed to the people to always keep their surroundings clean, bag their waste as well as pay their sanitation bills as at when due, to enable the agency to perform effectively. 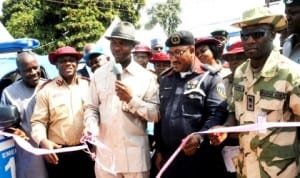 80 Arrested Over Violation Of Sanitation Law