The Federal High Court in

Enugu has adjourned to February further hearing in a case of rape preferred against one Emeka Ugwudiobi, a commercial bus driver.

Ugwudiobi was accused of raping one of his passengers from 7 p.m. to 10 a.m. at gun point in an uncompleted building around Mayor Market, Enugu, on February18.

According to the prosecution counsel, Mr Francis Ajagu, the driver plies the New Market-Gariki route and the victim was one of his passengers on the fateful day.

“On getting to Mayor Market, the driver observed that it was only the victim that was left inside the bus.

“He drove the bus to an uncompleted building beside the Mayor Market and started raping the victim,” Ajagu told the court.

He said the victim was raped from 7 p.m. to 10 a.m. without break and that the accused never heeded the pleas of the victim to have pity on her to allow her rest.

Ajagu said it was a passerby, one Mr Chidubem Ezeorah, who ran into the scene and reported the case to the police.

He said that the victim could hardly stand on her feet when the police came to her rescue in the uncompleted building.

However, the counsel to the accused, Mr Peter Obeta, described the accused as a responsible man who has a wife and four children.

He told the court that the accused had been into driving for the past 16 years and that nobody had ever complained that he was a rapist.

Obeta said that there was no way a bus driver would carry a gun inside his bus and the police would not notice and denied that his client had ever seen the victim he was accused of raping.

Justice Dorathy Agishi ordered the accused to be remanded in prison custody while adjourning the case to February 26, 2014 for further hearing.

The accused was arraigned for bailing his daughter, Gloria Nnadi, who allegedly stole N4 million from a drilling company at No.12, Marcus Garvey St, New Heaven, Enugu.

When the matter came up for hearing, the complainant told the court that the accused absconded from the company when its auditors discovered that N4 million was missing from its account.

Afonne alleged that the accused who was the company’s cashier was supposed to have remitted the money to the company’s account in the bank.

He said the cashier was later found and taken to the police custody where her father bailed her.

The complainant said that since she was granted bail, she had not reported to the police as ordered.

The accused, however, confirmed that he had not seen his daughter after her bail. 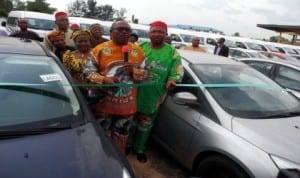