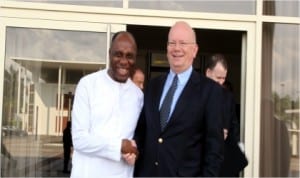 The Bank of Industry (BOI) says it has disbursed 60 per cent of the Federal Government’s N100-billion Cotton, Textile and Garment (CTG) Intervention Fund.

The bank’s Executive Director, Business Development, Mr Waheed Olagunju, said this in Abuja recently in a lecture which he delivered at the 3rd Annual Seminar for Trade and Investment Correspondents and Editors.

The CTG fund, domiciled in the BOI, was set aside by the government as loans for entrepreneurs in the cotton, textile and garment industry.

In the lecture, entitled, “Industrialising Nigeria through Effective Financing’’, Olagunju said that the security challenges facing the northern part of Nigeria had made it difficult for the loan’s beneficiaries in the region to pay back.

He urged the Federal Government to intensify efforts to curb smuggling and importation of foreign textile materials in order not to stifle the growth of local textile industries.

Olagunju, however, said that it was erroneous for local entrepreneurs to think that money was the predominant factor in starting any business.

“Entrepreneurship skills and ability are more necessary to a prospective businessman than financing.

“BOI is more interested in the character of an applicant for its loans before granting his or her request for finance,’’ he said.

Besides, the executive director said that the N700 billion pool funds for the country’s industrialisation, which was domiciled in the bank, was insufficient to finance the nation’s industrial needs.

He said that BOI was expanding its search for domestic debt market financing to support small businesses in Nigeria to start, grow and mature into big corporations.