A People’s Democratic Party (PDP) Board of Trustees

member, Prof. Jibril Aminu, last Monday, called for provisions  in the constitution to check defection by elected political office holders in the country.

Aminu, a former Senator, said at a rally in Yola that the ongoing constitution review should consider forcing elected office holders to leave office whenever they defected from the party that brought them to office.

He also called for the removal of immunity clause and the inclusion of stiffer penalty for corruption practice.

The Director-General, Ekiti State Centre for Arts and

Culture, Mrs Yetunde Fosudo, said that cultural festivals could be utilised to enhance the wellbeing of the people.

She said this in an interview with newsmen in Ado-Ekiti.

Fosudo said that cultural festivals were a potent means of celebrating the people and their cultural heritage.

“Culture is a way of life of the people and their communities.

“Cultural festivals serve as means whereby people display and showcase their culture and ways of life to the world,’’ she said.

(CAC), Alhaji Bello Mahmud, said in Abuja that the CAC’s goal was to be able to register companies within two hours, anywhere in Nigeria.

Mahmud in a lecture: Nigeria’s New Business Environment and CAC’s Intervention,’’ said it had been able to reduce the period of registration of companies from five days to 24 hours.

The registrar-general, at the 3rd Annual Seminar for Trade and Investment Correspondents and Editors, said that its activities had helped to expose “the wonder banks“ in the country.

“Our collaboration with the EFCC, the Central Bank of Nigeria (CBN) and other financial agencies have exposed over 370 `wonder banks` out of 400 ones that were investigated.

The Gombe State Government has empowered 233

trainees in various skills with equipment and funds in Dukku and Yamaltu-Deba Local Government Areas of the state.

The beneficiaries were trained under the Conditional Cash Transfer (CCT) scheme of the Millennium Development Goals (MDGs) Office.

Special Adviser to Governor Ibrahim Dankwambo on MDGs, Alhaji Adamu Audi, announced this at the graduation ceremony of the trainees in Deba, headquarters of Yamaltu-Deba Local Government Area.

it had trained 1000 youths on welding, cell phone repairs and yam flour processing in Taraba.

The ITF Area Manager, Yola Office, Alhaji Saleh Garba, said  in an interview   in Jalingo  that the training started in September and was held in Jalingo, Wukari and Bali local government areas.

Garba said that the objective of the training was to empower the youths to start their own businesses so as to reduce attention on civil service.

“The reality is that there is too much competition in acquiring a public service job these days.It is in the interest of the youth to embrace entrepreneurship; by so doing, they will certainly be self-reliant,” Garba said.

A member representing Dutse Constituency in Jigawa State House of Assembly, Alhaji Adamu Sada, has donated an 18-seater Peugeot bus to people with disabilities in the state.

Sada, who was on wheel chair while presenting the bus, said the gesture was to ease the peoples’ movement.

He said “the bus donation will ease the movement of my brothers and sisters that were living with disabilities like me.’’

The lawmaker said movement was one of the greatest challenges of such group of persons, adding that the bus would enable them to move freely within and outside the state.

Sambo said this at a one-day public lecture to commemorate the first year memorial of the former governor.

He said Yakowa rendered patriotic service to the state and country as a whole. “He dedicated his entire life to the advancement of mankind.’’

“He brought to bear his experience on any assignment given to him’’, he added.

Sambo said the gathering of personalities from all walks of life was a testimony of the lives Yakowa touched positively throughout his life time.

Some former employees of Nigeria Airways in Kano State

staged a peaceful protest over non-payment of their entitlements for 20 years.

The protesters, who thronged their former office on Bank Road in Kano at about 2p.m., carried placards with inscriptions as: “pay us our entitlements’’, “we are dying.’’

The National Vice Chairman, Nigerian Union of Pensioners, Airways Branch, Alhaji Mohammed Adamu, said the protest was informed by the failure of the Government to pay their entitlements.

According to him, over 900 of their members have so died of frustration while a number of them are still battling with one sickness or the other at home.

Not less than 1, 755 teaching and non-teaching staff,

across the 16 local government areas of Kwara State, converged on Ilorin to sit for the 2013 promotion examination.

The Executive Chairman, Kwara State Teaching Service Commission, Alhaji Umar Aboki, told newsmen that the promotion examination was to ensure that the teachers were able to impart quality knowledge on their students.

He said that the conduct of promotion examinations was a constitutional provision.

“This is a democratic government where every segment of the society should benefit from the dividends of democracy.

“Through promotion, civil servants would benefit from the dividends of democracy,” he said.

A former Chairman of the Lagos chapter of the Nigerian

Institute of Public Relations (NIPR), Mr Jide Ologun, has urged the electorate to ask politicians credible questions about the 2015 election.

“Definitely, the elections will hold but I am appealing to the electorate to ask questions concerning where  Nigeria will be in 20 years.’’

The Nasarawa State Government in collaboration with

Governor  Umaru Al-Makura made this known at the graduation of the trainees in Wamba on Monday.

Al-Makura said the state government was poised to curb restiveness through a robust youth empowerment programme.

He said that vocational skill acquisition was crucial to the nation’s transformation agenda, adding that it would engender a technology-driven economy and fast track diversification from oil.

The governor said the youth were trained in furniture making, welding and fabrications as well as electrical installation.

presented a bill for the creation of 27 additional local government development councils in the state to the state House of Assembly.

Presenting the bill, Aregbesola said the essence of the creation of more councils was to bring government closer to the people at the grassroots.

He said that the current councils in the state could  not bring the desired results.

The governor said this was because they were too large to achieve what the administration intended to achieve through the councils.

Sheikh Abdur-Rahman Ahmad, has declared that the Boko Haram insurgency is a collective embarrassment to all faiths in the country.

Ahmad, who spoke with newsmen, in Ogbomoso, Oyo State, said the group represented no religious interest, adding that their objective had yet to be known.

He said that it was difficult to know in whose interest they were fighting as they had attacked all faiths.

“I state unequivocally that Islam is different from Boko Haram. We don’t know who they are, their sponsors and why they are killing people.

The All Farmers Association of Nigeria (AFAN), Sokoto

State chapter, said it had concluded plans to start giving tractors to large-scale farmers in the state as loans.

The Chairman of the association, Alhaji Murtala Gagado, made the disclosure in a telephone interview with newsmen in Sokoto State.

He said the association, in conjunction with a Kaduna-based firm, Kaka Nigeria Ltd., was set to give out 50 tractors, worth N340 million, to large-scale farmers as loan.

According to him, each tractor will be given to the beneficiaries on loan at the cost of N6.8 million. 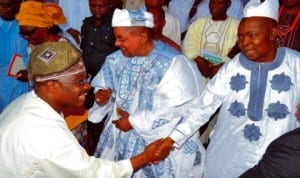