Some members of the All Progressives Grand Alliance (APGA) last Monday, demanded the reinstatement of the former Deputy Governor of Imo State, Mr. Jude Agbaso.

The members who staged a protest in Owerri, described Agbaso’s impeachment from office as an injustice.

The protesters who were restricted by security agents from reaching the Government House carried placards with inscriptions: “Reinstate our man back since Economic and Financial Crimes Commission (EFCC) has proved him innocent”, and “Who gave N1.3 billion for a job not done?”

The Publicity Secretary of APGA and spokesman of the group, Mr. Tony Mgbeahuru, described the impeachment of Agbaso as illegal and demands his re-instatement.

He said the APGA members and the people of Owerri rejected the impeachment of the former deputy governor.

According to him, since the EFCC cleared Agbaso of the alleged N485 million contract scam, the state government had no reason not to re-instate him.

“The people of Owerri are in total condemnation of the attitude of the present administration. The people of Imo are saying no to the sack of the former deputy governor and want him re-instated,” he said.

Mgbeahuru said the federal government’s anti-graft agency had in the course of its investigation traced the money to other accounts and exonerated Agbaso.

“The APGA members are not happy with the way the former deputy governor was humiliated. What we are asking for is that he be brought out to complete his mandate as the deputy governor of Imo State.

“We will not rest; we will not be satisfied until our request is granted.

“We equally want to know what happened to the N1.3 billion given upfront to a contractor. It is the state’s money and it has to be accounted for,” he said. 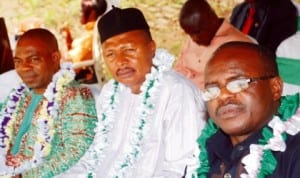