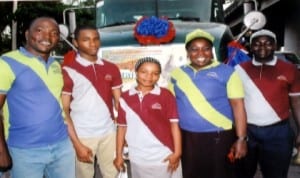 National Directorate of Employment (NDE) says it has trained 1,300 youths and women in Akwa Ibom in 10 marketable skills and businesses this year.

The NDE Coordinator in the state, Mrs Patience Osunkwo, made the disclosure in an interview with newsmen in Uyo.

Osunkwo said 200 of the youths were trained in different agro-allied businesses.

She explained that the trainees for the agro-allied programme were given one month theoretical training, and later posted to some private farms in the state for practical knowledge.

She said others were trained on trades such as welding and fabrication, plumbing, catering, hairdressing, computer repairs and mobile phone repairs.

The coordinator also said that each of the beneficiaries underwent the training programme for six months, and was paid a monthly stipend of N5,000.

She noted that each of the five graduates trained on small-scale enterprises was given N600,000 loan to start a business at the end of the training.

Osunkwo said the graduates who engaged themselves in oil palm processing, poultry farming and fish production were given a six-month period of grace before repayment.

The NDE official said the directorate, in collaboration with two members of the National Assembly from the state, also trained 200 youths and women in skill acquisition.

She gave the names of the legislators as Sen. Alloysius Etok, representing Akwa Ibom North-West senatorial district and Mr Robbinson Uwak, representing Oron Federal Constituency in the House of Representatives.

She urged other individuals and organisations in the state to join hands with NDE in training the youths and providing starter packs for them to start business.

She said “we need to resettle these trained youths so that they will become useful to themselves and employ others; we have so many of them in our data bank.

“The training will go a long way in reducing unemployment and crimes in the state, thereby curbing youth restiveness.”