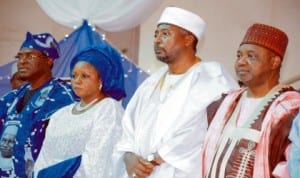 of Nigeria (AFAN), Mr Kunti Adamu, has called on the government to provide loans and inputs to farmers, to assist them to embrace mechanised farming.

Kunti made the call in an interview with newsmen last Thursday in Makurdi.

He stated that if loans were given to farmers, this would encourage them to venture into large-scale farming, to boost food production in the country.

He also appealed to the government to organise workshops on quarterly to educate farmers on the latest developments in the agriculture sector.

The Director-General, Ekiti State Council for Arts and

Culture, Mrs Yetunde Fosudo, has lamented non-participation of states and low turn-out of foreign countries at the ongoing 2013 Ekiti Festival.

Fosudo told newsmen in Ado-Ekiti on the sideline of the ongoing festival that only two countries and 16 local governments were at the festival.

She said that only Senegal and Mali were participating in the festival, adding that she was disappointed with the low turnout of foreign participants.

Fosudo also expressed concern about the non-participation of states.

“There is no single state that participated in this year’s edition of the festival,’’ she said.

Three drivers were arraigned before a mobile court in

The drivers are Nurudeen Kareem of Mpape, Abuja, and Samaila Mohammed of FCDA Quarters, Garki, Abuja and Alfred Sunday, an official of Zenith Bank, Garki, Abuja.

All the accused pleaded guilty to the offences and the magistrate, Mr Emmanuel Iyana, ruled that the offenders should pay N10,000, N5,000 and N4,000 fines respectively or have their cars impounded.

in Kaduna to celebrate creativity of the music industry in the North.

The event that was organised by Top Entertainment attracted fun-loving people from across the city.

Mr Ibrahim Jika, Chief Executive Officer of Top Entertainment, told newsmen that the idea was to bring music promoters, marketers and upcoming artists together to give young artists the opportunity to exhibit their talents.

day signed a law which prescribed 14 years’ imprisonment, without option of fine, for those found guilty of homosexuality, lesbianism and sexual harassment.

The State House of Assembly recently amended Sections 284 and 285 of Penal Code Law, Cap. 96, Laws of Katsina State, 1991, to provide for stiffer punishment for those found engaged in the illegal acts.

The law states:  “Whoever has carnal intercourse against the order of nature with any man, woman or animal, shall be punished with 14 years’ imprisonment and liable to N10,000 fine.

“Any woman, who employs means of satisfying her sexual desire through bodily contact with another woman or otherwise, with or without her consent, shall be liable to 14 years’ imprisonment together with N10,000 fine.

day that it would conduct an environmental audit to ensure compliance with Environmental Impact Assessment guidelines.

The Permanent Secretary in charge of the ministry, Alhaji Sanusi Katune, gave the hint in an interview with newsmen in Birnin Kebbi.

Katune observed that many construction companies failed to comply with the legal requirements of conducting Environmental Impact Assessment (EIA) before executing their projects.

of Nigeria (PENGASSAN) says the delay in the enactment of the Petroleum Industry Bill is crippling investments in the oil and gas sector.

The National Public Relations Officer of PENGASSAN, Mr Oluseyi Gambo, made the observation in an interview with newsmen last Thursday in Lagos.

He said the inaction on the bill had limited foreign investment in the industry.

Gambo said the association was optimistic that the bill would become a law to fast track development in the oil and gas sector.

Nasarawa State Government has called for support from

Lafia Emirate Council in its effort to tackle the problem of erosion and flooding in the state.

The state Commissioner for Environment and Natural Resources, Alhaji Adamu Muazu, made the call during a courtesy call on the Emir of Lafia, Dr Isa Mustapha, in Lafia last  Thursday.

Muazu said the recent disaster prompted him and his management team to embark on advocacy visit to the Emir of Lafia and the affected areas, to find solution to the problem.  At the emir’s palace, Muazu said he came to seek for royal blessings and support from the emirate council to curb the problem of flooding that had ravaged the metropolis.

the remand in prison custody of a 17 year old student, Abubakar Suleiman for act of indecency.

The accused was arraigned in court on a one count charge of act of gross indecency contrary to Section 285 of the Penal Code. The Prosecutor, Sgt. Gunduma Ibrahim, had told the court that one Rabia Ibrahim, of Sani Mambo Street, Suleja, reported the matter at the station on December 1.

Ibrahim said that on November 30, the accused entered the complainant’s residence and met her three years old daughter inside the house.

day said the state government had taken steps to ensure that farmers enjoyed the full benefits of cocoa production.

Mimiko made this known when he was honoured as the Nigeria Cocoa Ambassador by the Cocoa Farmers Association of Nigeria (CFAN).

The association also recognised the Minister of Agriculture, Dr Akinwumi Adesina, as a merit award recipient.

Mimiko, who thanked CFAN for the honour, said efforts were on to ensure that farmers were not short-changed in the entire cocoa chain, production to marketing levels.

dissolved a 22-year-old marriage between Ruth Abimbola and her husband, Elijah on grounds of unfaithfulness and marital unrest.

The President of the court, Chief Bolarinwa Popoola, who dissolved the marriage, held that the respondent’s absence in court was an indication that he had no interest in the relationship.

“The marriage, is therefore, dissolved and the court grants the custody of the four children to their father as they are of age,’’ he ordered.

He made the call, while speaking with newsmen in Ibadan.

Jubril said that the EFCC, since its establishment in 2003, would have performed better without undue interference from the Federal Government.

A Base Ammunition Depot of the Nigerian Army, Gusau, said it had repatriated 226 foreign donkeys to Niger Republic.

The Commandant of the depot, Major  Hamman Saleh, told journalists while loading the donkeys at the Tsafe military check point, Zamfara, that the donkeys were intercepted in the bush on Monday along with their 49 owners.

Saleh said due to the security challenges in the country, the donkeys and their owners were apprehended and searched to detect possible concealed weapons.

He, however, said that only axes and cutlasses were found in their possession, adding that the intruders, however, gained entry into the country illegally.