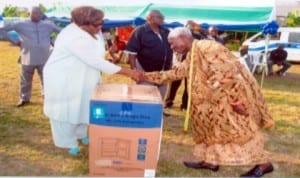 The Port Harcourt Electricity Distribution Company (PHEDC) last Tuesday projected that it would take between 100 and 180-days to deliver improved power supply to four states under its jurisdiction.

The Managing Director of 4Power Consortium, owners of PHEDC, Mr. Matthew Edevbie, made the disclosure while addressing workers at the inauguration of the company in Port Harcourt.

The consortium had under the on-going nation’s power sector privatisation acquired the assets of the defunct Power Holding Company of Nigeria (PHCN) on November 1, 2013.

Edevbie said the projected days would enable the company to restructure its management and put mechanisms in place for improved electricity supply.

“We have a very challenging task ahead; but we are confident that we will succeed in satisfying customers, and also make profit from our investments.

“Workers must brace up to meet the federal government and customers’ expectations in providing efficient and stable electricity supply to our catchment states.

“The challenges facing the company in providing stable electricity supply are enormous; but we are equally convinced that the opportunities in the sector are enormous.

“In this transition period of 100 to 180-days, we will also focus on upgrading our network as well as harmonise our electricity billings to ensure the company’s survival,” he said.

Edevbie called on workers not to involve themselves in acts that are capable of derailing the federal government’s power sector reform.

Meanwhile, the Manager of the Trans-Amadi Business Unit, Mr Romanus Chidi said that the drop in electricity supply in the state was as a result of “ongoing upgrade of facilities to boost power supply.”

“The upgrade will continue until late December and so, customers should be patient because the upgrade will enable us provide a stable and cost-effective electricity supply,” he said.