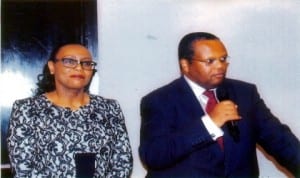 The Nigerian National Petroleum Corporation, the Central Bank of Nigeria and the Federal Ministry of Finance will today meet over the sum of $49.8bn, which the CBN alleged NNPC failed to remit to the federation account.

The NNPC’s Executive Director, Explorations and Production, Mr. Abiye Membere, and the Director, Department of Petroleum Resources, Gerorge Osahon, disclosed this, Saturday at a media briefing in Abuja.

Osahon said, “The agencies are meeting on Monday to straighten the record.”

Membere stated that the NNPC was ready to defend what it had done.

The CBN Governor, Mallam Lamido Sanusi, had in a letter to President Goodluck Jonathan, alleged that the NNPC failed to remit $49.8bn to the federation account from January, 2012 to July 2013.

But Membere, at the media briefing, said that the figure could not be justified. He said the NNPC was surprised because the letter, which was written in September 2013 was leaked to the public to heat up the polity.

He said, “The letter was written in September. The NNPC responded immediately through the channel it came. It was really surprising that a confidential letter of this nature will also go out and heat up the polity. “This is actually why we are worried, considering where it is coming from. It is coming from the top. It is taking a political dimension, which is not good for the country at all. It has come to a point where the NNPC and other agencies have no choice but to keep the record straight.”

He said the NNPC remitted $18.48bn to the federation account and not the $15bn claimed by the CBN. Membere stated, “The CBN governor’s letter indicated an amount that was remitted: $15bn. But our record indicated that we remitted $18.48bn within the same period.”

The executive director said the CBN ought to check accounts for royalty and tax before making the claim about the missing $49.8bn.

He stated that the NNPC would not collect revenue on behalf of the Federal Government and not remit it. According to him, expectations on revenue should be lower compared to previous years because of incessant pipeline vandalism.