Governor of Rivers State, Rotimi Amaechi has disclosed that he had been forewarned about the travails his administration is currently facing.

Governor Amaechi made this known while speaking at the Night of Glory Praise and Worship Session, held at the Alfred-Diette Spiff Civic Centre Complex, Port Harcourt.

He recalled the travails and persecution he had suffered with his wife all through his political life and affirmed that God had assured his family that he would lead his government into 2015 when his tenure would elapse.

Amaechi further explained that several revelations from men of God had it that, nearly all his supporters would abandon him, a situation that would suggest that God had left him. He however remained optimistic, asserting that, at the end, he would triumph over his opponents.

“If you recall my political history, beginning from the time I was Speaker of the House till date, it has not been easy with us. We have always confronted God in prayers. History has it that, we are the only couple that became Governor without election and God has assured us that he will lead us up to 2015. “I am neither a prophet nor a pastor, I am just a child of God and very soon, I will go back to God in prayers and surrender myself to God”, Amaechi explained.

“I thank God that we are all here. There are so many actions that I have taken that I could not account for, and a man of God had told me that a period like this will come, when nearly all my supporters will leave me behind, and that it will be so tough, looking as if God has deserted me, but at the end of the day, we shall triumph. “It didn’t quite make sense to me as Governor, until when the battle started, it now occurred to me that a man of God had prophesied to me earlier”, Amaechi said.

He however assured his supporters not to be deterred by unfolding events, adding that his position has been ordained by God, and he will remain in office till the end of his tenure.

Amaechi, who said this in Lagos at an event organised to pay tribute to late Dr. Nelson Mandela, challenged Nigerians to hold their leaders accountable.

He said, “If you see a thief and you allow him to be stealing, what have you done? You have stoned nobody; that is why we are stealing. Who have you stoned? They came out and started dancing oil subsidy, oil subsidy. They told you that they stole N2.3trn, what did you do?

“Instead you are protesting ‘bring more oil subsidy’; the oil subsidy that is not reaching the poor. A few individuals are going away with the money and you have done nothing. You are mourning Madiba, who lived up to 95, and he was very angry with Nigeria when he died. “You’ve heard that $50bn is missing and you have done nothing about it. In some countries people will go on the street until they return that money. It is N8trn, it can change Nigeria he emphasised.

“Me I want to steal only $1bn, let them bring it. You read Obasanjo’s letter and you are asking why is he writing the letter, is he a South-South man? In fact, when he was there what did he do? You, what have you done? If you don’t take your destiny in your hands, we will go and other leaders will come and continue stealing,” he added. 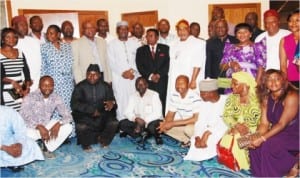 Members of the 18th Regular Course of the Nigerian Foreign Service Academy during their 2013 Annual Dinner in Abuja last Saturday.