The Director of the service in Anambra State, Mr Alex Okeiyi, announced the arrest in Awka while briefing newsmen.

He said Ohaegbulem, 43, whom he described as “a notorious fraudster” for maintaining multiple identities with his picture, was arrested in Asaba.

According to Okeiyi, a total of 194 dividend warrants belonging to unsuspecting shareholders were recovered from him.

“He confessed to conniving with the manager of Okaiuga Micro-Finance Bank, Umuahia, Ukanwoke Orji, now at large, and his Operations Manager, Emmanuel Mbakwe, to cash the warrant through a spurious company, Access Enterprises Ltd,’’ he said.

The director said the suspect also confessed to have swindled uncountable number of victims through non-existent contracts in Ebonyi State Government House, posing as a top official of the government.

Okeiyi said that Mbakwe, 54, also confessed to have entered into agreement with Ohaegbulem to receive 20 per cent each of the value when cashed.

“Anifowoshe, 45, was implicated by Ohaegbulem as the supplier of the warrants.

“He confessed to have been approached by one Chisom in January 2012 to source for dividend warrants and consequently approached Babatunde of NIPOST to source the items,’’ he said.

Okeiyi said the warrants sold to both Chisom and Ohaegbulem were worth about N20 million.

He added that a total of 25 dividend warrants were recovered from the suspect at the point of arrest, including that of Oando PLC in the sum of N37,704 belonging to Sen. Uche Chukwumerije.

“The other UBA warrant in the sum of N47,416 belonged to Prof. Ifedayo Olawale,’’ he said.

The fourth suspect, Babatunde, 45, was also of the NIPOST before his arrest and had confessed to the crime.

Okeiyi said the suspects would be handed over to the relevant agency for further investigation and necessary action.

Similarly, Okeiyi said that one Chukwunonso Emeghalu, 30, had been arrested for collecting applications from unsuspecting members of the public to secure employment for them in the service.

“Some of the victims disclosed that the suspect informed them that their training would commence in Enugu on August 15, only to send text messages to them postponing the commencement to October 28.

He cited a send-off ceremony for the state director of security as the reason for the postponement.

The victims claimed he was extorting little amount of money from them for the employment and sometimes demanded for drinks from them.

The director said the suspect claimed that the idea of employment scam suddenly came to him but he later realized it was not going to work, and returned most of the applications to their owners. 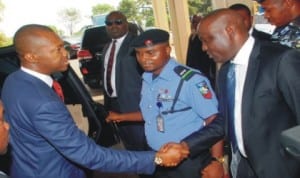