All is now set for this year’s Rivers State Arts and Cultural Festival popularly known as CARNIRIV which came into existence about two decades ago with  some important additions to the existing schedule to bring it in line with modern realities. The week long activities begin on Sunday December 15th to Saturday December 21st  2013.

The Tide investigation revealed that already hundreds of tourists have arrived Port Harcourt, the Rivers State capital as the various hospitality outfits in the state have put their facilities together to ensure maximum comfort of their quests, while security outfits are leaving no stone unturned to provide necessary security of lives and property during the festival.

One of the tourists from Cross River State, Calabar, Mr. Victor Okon who spoke with The Tide Entertainment in Port Harcourt, noted that the festival ranked among the best in the country as it provides opportunity to meet with different people from different cultural, traditional and ideological backgrounds as well as boosts business activities in the state.

He also contended that the carnival will help to bring to limelight the rich cultural heritage of the state, showcase tourism potentials and provide opportunity for the cross fertertilsation of business ideas as well as attract employment and revenue to the people of the state amongst other benefits.

It would be recalled that Okirika Local Government Area of Rivers State swept all the awards in the various competitions during the 2012 edition of the Festival. The LGA won the awards in three out of the four categories. 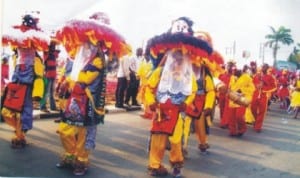