Minutes after news of the passing away of former South African President Nelson Rolihlahla Mandela, tributes and speeches started streaming in.  Government leaders throughout the world paid tribute to Nelson Mandela. Nelson  Mandela’s luminous example  and his political legacy  of Selfless service for the emancipation of the downtrodden, of justice and equity, transparency and accountability in our society. “What a great example Nelson Mandela was, Nelson Mandela is a leader of leaders, Madiba’s legacy beckons us to follow his example to strive for selfless, responsible, accountable, just and corrupt free society. Not the good speeches eulogizing his good leadership let us reflect and imbibe his legacy leadership. Hence this piece. The life story of Nelson Mandela is well known, and has elevated him to the level of such widely recognized heroes as Mahatma Gandhi and Mother Teresa. There is indeed much courage, sacrifice, wisdom and nobility in his life — attributes that demand our deep respect and have much to teach us. What is less well-known is how Mandela evolved into the kind of strategic leader who, from prisons on Robben Island and elsewhere, helped to bring genuine democracy to South Africa. For example, while isolated from his fellow prisoners by force, he steered secret government meetings toward the abolishment of apartheid and free elections. Subsequent to that, he became the country’s first democratically elected black president. Mandela’s remarkable story holds valuable lessons for other leaders involved in deep struggles, foremost among which are the importance of holding firm to a morally just vision and the ability to influence a sequence of key strategic decisions over time (decades, in his case) in order to bring about truly remarkable results.  Three decisions especially stand out in Mandela’s evolution as a strategic leader. To appreciate these fully, however, we need to understand some of the social and political contexts that shaped his career and values.

A Life Sentence: Mandela was born in 1918. His father was a top adviser to a tribal royal family (the Thembu) and helped elect the tribe’s new chief who later — after Mandela’s father died — took the young boy into his own family. This path led Mandela from an isolated small village upbringing to the center of tribal power in his teens, which in turn awakened his interest in education and politics. He studied law at the University of the Witwatersrand and early on became involved in anti-colonial politics. Mandela was a founding member of the Youth League inside the African National Congress (ANC), the main black political party of South Africa, which was later outlawed and banned by the government. The country’s ruling party, the National Party (NP), started to implement a strategy of strict racial segregation, later known as apartheid, after coming to power in 1948. Mandela obtained prominence in the ANC through his liberal political views and opposition activities, especially the Defiance Campaign of 1952. He was at first committed to non-violence, inspired by Gandhi’s successful opposition to British colonial rule in India. But eventually, due to the government’s harsh measures against non-violent opposition, he became increasingly drawn to various forms of targeted sabotage — actions that resulted in numerous arrests. In 1961, he co-founded a militant wing in partnership with the South African Communist Party and was eventually convicted of treason. Mandela was spared the death sentence, but was condemned to life in prison. He served a total of 27 years. In 1994, he became the country’s president.

While in prison, Mandela stood out — among both prisoners and guards — as highly principled, respectful, dignified and willing to sacrifice his life for his beliefs. Many of his fellow political prisoners were heroic as well. Most were well trained, and they taught each other about their respective fields of expertise while working in the limestone quarry. Prison life was harsh, with bad food, cold sleeping conditions in the winter and long periods of loneliness. Mandela fell ill intermittently and contracted nasty lung infections, including tuberculosis, due to his years in damp prison cells. Despite these conditions, he was able to write an influential autobiography in secret titled,Long Walk to Freedom, which chronicles his life in detail against the backdrop of deep social injustice and harsh state oppression. This clandestine book was smuggled out in pieces and printed overseas when finished. It became a global best-seller. An international freedom campaign by the ANC, led by the exiled leader Oliver Tambo, had managed to make Mandela the poster child of opposition to apartheid as well as an eloquent spokesman for a new democratic South Africa. The world took notice: International businesses as well as governments increasingly boycotted South Africa during the 1980s. The NP’s unyielding stance, especially President P. W. Botha’s dogmatic hardline approach and focus on law and order, made the NP a pariah on the global stage. Business leaders from Anglo America and other local companies were increasingly putting pressure on Botha and later on his successor, F. W. de Klerk, to change course. Also, young whites voiced their opposition to apartheid and racism in churches, schools, social clubs, work settings and at home with their parents. Eventually even the Dutch Reformed church, which had given apartheid proponents dubious biblical justification for the segregation of races, changed its views. Very slowly, the Afrikaner leadership started negotiations with Mandela in prison. It was a form of intermittent shuttle diplomacy, with government leaders visiting him in person, sympathetic white guards passing messages to and from the ANC, and Mandela being flown from his new prison house near Cape Town to meet in secret with Botha and later de Klerk in the capital of Pretoria. President de Klerk’s back was very much against the wall in 1990. The economy was suffering from the boycotts; business leaders wanted change; the containment strategy of carving out Home Lands for blacks was failing, and the country was on the brink of civil war in black townships. Something had to give, and it happened in de Klerk’s seminal opening speech to Parliament in February 1990. He called for free democratic elections (one man, one vote) as well as the unconditional release of all non-violent political prisoners. In addition, he lifted the ban on the ANC and many other outlawed parties. This was a watershed event since whites were a minority in the country and would surely lose political power through these declarations. De Klerk kept his promises and released political prisoners, although not Mandela at first, given his violent past. De Klerk was hoping for a power sharing arrangement with the ANC, but this eventually proved to be naïve on the part of this otherwise very pragmatic NP leader. De Klerk and Mandela were awarded the Nobel Peace Prize in 1993 for achieving a largely non-violent, voluntary transfer of power by a strong minority group to a hostile majority, a rare event in human history.

The Face of the Opposition: Against this complex backdrop, three strategic decisions by Mandela — among many others — stand out from a leadership perspective. The first occurred when Mandela was offered a conditional release from prison by the government. In a 1985 speech to the nation, President Botha offered Mandela freedom if he renounced violence and other illegal activity. The President tried to shift the blame for imprisonment to Mandela himself: After all, he was free to go now, provided he would be law abiding. Mandela did not fall for this transparent ploy. Yes, he very much desired freedom after decades of hard labor and confinement in a small cell. But he also felt it would betray his principles, his leadership and the ANC’s long struggle. Here is how Mandela replied, in part, to President Botha’s disingenuous offer: “What freedom am I being offered while the organization of the people remains banned?…. What freedom am I being offered if I must ask permission to live in an urban area?…. Only free men can negotiate. Prisoners cannot enter into contracts.” 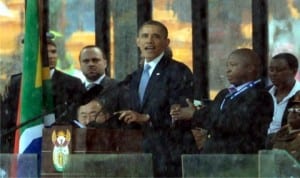 A Case For Corruption-Free Nigerian Judiciary