The aphorism that health is wealth  has indeed  been globally upheld as an indisputable truth. This is predicated on the premise that a nation in quest of political and socio-economic prosperity cannot undermine the well being of the mass of her citizenry as  doing so will amount to putting the proverbial cart before the horse.

This perhaps explains why the Dr Goodluck Ebelle Jonathan  administration in Nigeria is working tirelessly and patriotically to ensure that Nigerians have access to a wholly indigenised, dependable as well as an internationally comparable healthcare delivery sector. Unknown to numerous Nigerians, the nation’s health care providing sector is being regularly  accorded a maximised government attention in an attempt to guarantee good and enduring healthcare  services for all and sundry. This explains why the choice of  Dr Paul Bortwev Orhii, an international  technocrat, administrator, medical icon and legal luminary, as a substantive Chief Executive Officer of the nation’s pro-health boosting and human life elongating agency, the National Agency For Food, Drug Administration and Control(NAFDAC) is indeed not a misplaced decision or priority going by the various distinct, dynamic and overwhelming health boosting achievements being massively recorded by the agency in  its dogged determination to better healthcare provision for the generality of  Nigerians in line with the aspirations and determination of the nation’s current democratic dispensation.

Apart from the internationalization via total overhaul of the agency’s  multi-million naira now ultra-modern Laboratory in Agulu in Anambra state ,east of Nigeria, to enable it render international standard services,NAFDAC is working frantically towards ensuring that indigenous pharmaceutical firms nationwide successfully attains the World Health Organization’s(WHO) pre-qualification for drug production in line with international practices so as to empower our locally produced pharmaceutical products to compete favorably with those of their counterparts abroad.

Already, the agency has commenced collaboration with the nation’s bank of industries  to initiate a multi-million naira Pharmaceutical development fund which will in turn avail our indigenous pharmaceutical industries with production boosting minute interest loans. It also aims at ensuring the success of the recently launched Federal Government’s Save One Million Lives programme targeted towards achieving the United Nation’s global strategy to save multi-million lives by 2015. This has placed on the agency’s shoulders the onerous responsibility of directing about  (50) developed and developing countries worldwide on the modalities of enhancing safety and quality for life-saving commodities approved for the programme.

The introduction of an adequately monitored  isolated and professionalized marketing strategy in the quest for outright sanity in drugs distribution and sale through the localisation of regional Mega Drug Distribution Centers  (MDDCs)  as well  as State  Drug  Distribution Centers(SDDCs)coupled with its numerous landmark achievements in this regard has made it a cynosure of all eyes both locally and internationally .

On the legal terrain, the agency through its incumbent chief executive’s wealth of legal experience has emerged persistently victorious having recorded notable,  achievements in this regard via successfully securing conviction of many  counterfeiters of the agency’s regulated products thereby achieving a feat which indisputably and remarkably remains outstanding being the first of its kind in the history of the agency’s existence.Furthermore,the agency’s enabling Act tagged: Decree No 15 of 1993 as amended to ACT Cap N1 Laws of the Federation of Nigeria (LFN) 2004, which empowers it to control and regulate the use of Food,Drugs,Cosmetics,Medical devices and Packaged Water including all drinks generally regarded as regulated products of the agency, is currently being compelled to undergo an overhaul in an attempt to further empower  it for more patriotic services.

On food safety, sanitisation and regulation, the agency has  introduced the Hazard Analysis and Critical Control Point plan for Food safety in Nigeria, the convening of intellectual interactions between NAFDAC and Millennium Development Agencies (MDAs), professional and tertiary institutions  which  culminated in the inauguration of a National Food Safety Committee which has become a focal point of food safety in Nigeria.

While numerous food products have been certified and registered by the agency under the leadership of its incumbent chief executive, fast food providing industries nationwide are being intensely monitored and highly supervised thereby compelling them to comply with good hygienic practices so as to forestall outbreak of food borne diseases or ailments. Also, bakeries are being strictly supervised nationwide by dynamic and strategically seasoned NAFDAC operatives to prevent bakers from using the much detested  deadly flour/dough enhancer  Potassium Bromate which is known for its cancer causing ability.

Apart from making a huge success of its Vitamin A food fortification programme,as well as maximally promoting food security while imploring stakeholders in the food sector to adopt high quality cassava flour in the production of bread and other bakery products,it has equally recorded  victory in the Salt iodisation programme aimed towards eliminating iodine deficiency disorders in the entire Nigeria Federation.To foster safe and ideal application  of Agro-Chemicals,befitting guidelines and standard operating procedures have been introduced for effective regulation and control of chemicals. To ensure its compliance with modern practices, risk assessment and field trials for Fertiliser have been imbibed by the agency as part of measures to enhance effective and efficient control cum management of Agro-Chemicals nationwide.

There is no doubt that modern trend in water provision and consumption  has brought about proliferation of water packaging plants  nationwide which has subsequently placed on the agency the onus of guaranteeing via dynamic and efficient regulation availability of safe drinking water thereby preventing the outbreak of various water borne diseases like: Cholera,Typhoid,Diarrhea etc. In this regard, numerous packaged water products have been  professionally analysed,tested and certified for consumption by NAFDAC such that currently about  10,000 water products have so far been registered by the agency.

Aside its recently introduced E-Clearance Portal which makes possible on-line clearance of goods at the nation’s ports, the agency has established web presence where information on activities of the agency could be easily accessed. On the other hand, a corporate portal which allows in-house information sharing as well as a laboratory information management system to support quality laboratory procedure and data processes has been put in place. There is also its automated product administration and monitoring solution which is a web portal that is internet enabled to provide electronic platform for the management of the registration process/E-registration and a data base to capture information on the agency’s regulated products.

Obviously, counterfeiting maximally retards health boosting efforts if allowed unabated. This explains why the Dr Orhii led NAFDAC  management team have held on tightly to the horns of the proverbial bull in this regard. The agency took the entire world by surprise when it co-opted cutting edge technologies into combating pharmaceautical products counterfeiting,a heroic,historic and dynamic attempt which has earned for it,victory and global recognition as well as distinct international reputation for Nigeria.This comprise;Truscan technology,Black Eye and Radio Frequency Identification Systems and the Mobile Authentication Service while also engaging the global pharma health fund mini-lab test kits. 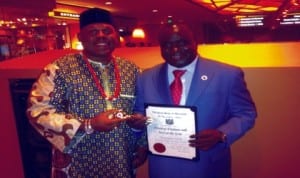 RSG , Preparing For The Unforeseen