simply as “an act done with the intention of giving some advantage inconsistent with official duty and the rights of others’’.

The watch-dog organisation recently ranked Nigeria in the 144th position out of 177 countries in the global corruption index, meaning that the level of corrupt practices is high in Nigeria.

Against this background, Justice Folake Solanke, a retired Supreme Court Justice, once asserted that there is corruption in the land.

For her, to tackle corruption in Nigeria, the battle must begin with the judiciary.

“The Nigerian society is sick and needs urgent treatment. The judicial process is the only method by which erring members of the society can be made accountable to pay the penalty for any wrong doing.

“There is corruption in the land, and only the courts can purge the society; but who purges the judiciary?

She, therefore, urged the Nigeria bar Association (NBA) to look inwards and expose and report corrupt lawyers to the Legal Practitioners Disciplinary Committee.

Wali said that corruption in the judiciary symbolised the final decay and societal suicide, adding that among the three estates of the realm, the judiciary occupies a princely position.

Noting that judicial corruption was the worst kind of corruption which must be fought to the finish with all it takes to do so.

“The judiciary is entrusted with the near-divine office of deciding life and death, of adjudicating disputes among constituents of society, including the other estates of the realm.

Raising rhetorical question, “who will judge the judges’’, Wali stated that judicial corruption empties the judicial office of its essence, adding: “Corruption is a crime which the judiciary ought to punish, not partake in.’’

To tackle the challenge, he said that the NBA had concluded plans to set up a ‘Name’, ‘Shame’, and ‘Tame’ programme to stem the tide of corruption in the system.

The naming and shaming stages, he said, would lead to a gradual sanitisation of the bench and the bar.

“By a whistle blower mechanism, the NBA will encourage lawyers and litigants to report corrupt judges and lawyers through an anonymous phone-in service.

“Under ‘shame’, the NBA will investigate the reports, not for accuracy but for reasonable viability, and submit its findings to law-enforcement agencies for follow-up action which it will encourage and monitor,’’ Wali said.

Speaking in the same vein, Justice Mariam Mukhtar, the Chief Justice of Nigeria, observed that anti-corruption war in Nigeria’s judiciary was a battle that required all hands to be on deck.

“Anti-corruption war in Nigeria is like a gun-war being fought with bows and arrows; it is a war that can turn its fighters into victims and those being fought into heroes.

“It is a war that both sides manipulate to gain personal and political points; it is a ‘world’ of controversies, politics, extensive debates and high public expectations; it follows that it is a war that all hands must be on deck.

“The legislature has done their bit – passed anti-corruption law; and the executive has EFCC and ICPC. What is the judiciary doing?

“They adjudicate anti-corruption and criminal litigation, but they allow litigation to continue indefinitely while criminals walk away and the people forget.

“If you steal a goat or a thousand naira, you go to jail. But if you steal oil or a billion naira, you plea-bargain and walk away – a sublime piece of mysticism and nonsense,’’ she said.

According to him, spiraling corruption in the nation’s judiciary was a worrisome new development, a clear departure from what obtained in the past.

“From my privileged and vantage position as a member of the Legal Practitioners Disciplinary Committee, I have come to see the urgency of a thorough and comprehensive sanitisation of our profession,’’ observed Alli.

Within a few months of constituting the committee, five lawyers whose cases were reviewed and concluded were disbarred, while two others were suspended for five years each.

Stakeholders agree that the National Judicial Council (NJC) was quietly and effectively prosecuting a war against judicial corruption with resultant casualties.

The NJC recently held an emergency meeting to review pending cases of judicial misconduct against some judges.

The council recommended compulsory retirement of some judges, including Justice Charles Archibong, and Justice Thomas Naron, of the Federal High Court and the Plateau High Court respectively.

Also Justice Mohammed Talba of the FCT High Court was placed on a 12month suspension following his controversial “slap on the wrist’’ conviction and sentencing of an ex-director of the Police Pensions Fund.

Justice Lawal Gumi, the FCT Chief Judge, opted to resign following the setting up of a panel to investigate allegations of misconduct against him.

Also, Justice Okechukwu Okeke of the Federal High Court was warned three weeks to his retirement from the bench over issues bordering on unprofessional conduct.

Five more high court judges, a judge of the Federal Court of Appeal and an former Chief Judge of Lagos State, were named by the EFCC over matters bordering on official misconduct.

But human rights activist, Mr Femi Falana (SAN), had suggested that the NJC reforms be institutionalised.

He asserted recently that though many Nigerian judges are not corrupt, there are corrupt elements amongst them.

“Majority of Nigerian judges are not corrupt. The fight against judicial corruption is, therefore, being waged against the few that have perfected the act of selling justice to the highest bidders and have thereby, dented the image of the judiciary. 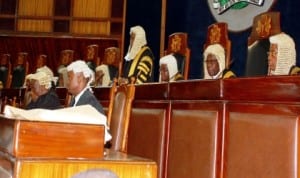