Sunday Sulaiman, 38, said to offer spiritual protection
to armed robbers, has been arrested by the police in Ekiti State.
Police Public Relations Officer (PPRO) in the state, Mr Victor Babayemi, told newsmen that Sulaiman was picked up for organising prayer sessions for robbers tormenting residents of Ado-Ekiti.
He accused the suspect of offering spiritual backing to the robbers, who in turn gave him certain percentage of loot they got from each operation.
Sulaiman, a native of Saare in Kwara, was said to arrange “prayer warriors at the Way of Salvation Church Ministry’’ for the suspected robbers.’’

The Arewa Consultative Forum (ACF), has called on
the Academic Staff Union of Universities (ASUU) to ratify its agreement with the Federal Government so as to resume work immediately.
The National Publicity Secretary of the forum, Mr Anthony Sani, made the call in a statement made available to newsmen in Kaduna .
The ACF said calling off the five-month-old strike would be in the best interest of students, parents and the educational system.
“We wish to call on ASUU to please hasten the completion of the said paper work with a view to calling off the strike forthwith,” it said.

As part of efforts to enhance fish production and
reduce unemployment, the Kebbi  State Government says it will construct five pilot fish ponds to train job seekers in small and medium-scale fish farming.
The state Director of Fisheries,Alhaji Mustapha Dole, made this known in an interview with newsmen in Birnin Kebbi, recently.
Dole said the ponds would be located in Argungu, Birnin Kebbi, Zuru, Bagudo and Yauri zonal offices.
He said the identified job seekers in the areas would be trained on techniques of producing fish feeds locally.

President, Catholic Bishops’ Conference of Nigeria
(CBCN) Most Rev. Ignatius Kaigama, has called on Nigerians, irrespective of their religious beliefs, to embrace peace.
Kaigama said in an interview with newsmen that peace could only be achieved through personal orientation and cultivation.
The cleric, who commended the Federal Government on the measures it had taken in curtailing the security challenges in the country, urged Nigerians to always be at peace with themselves and their neighbours.
“Multiplying security agents on the streets can only bring about artificial peace. Even if we supply five soldiers to every family in Nigeria, peace cannot be achieved in total.
Nassarawa

Governor Tanko Al-Makura of Nasarawa State says his
administration would implement the report of the Judicial Commission of Inquiry into the Alakyo killings.
He gave the assurance when he visited the palace of the traditional ruler of Obi, Alhaji Umaru Ogiri, in Obi Local government area of the state.
Al-Makura said that any person found involved in the killings would not be spared.
“I want to appeal to the people of Obi not take judgement into their own hands.
“The judicial commission of inquiry has now completed its proceedings, we are waiting for the outcome of the inquiry and I can assure you that we will implement it,” he said.

The Niger State government says it has begun the
evacuation of mentally-ill from the streets, to mark the International Day for People with Disability.
The Commissioner for Gender Affairs and Social Development, Hajiya Hasana Adamu, said at a media briefing in Minna that 15 of such people had been removed for rehabilitation so far.
She also said that the evacuation of such mentally-challenged persons from the streets would enhance clean environment.
“Last week, we were able to pick 15 mentally-challenged persons from the streets of Minna to our psychiatric home in Bida’’, she said.

The Chairman, Osun State Technical Committee on
Federal Road Safety Commission, Prof. Joseph Fawole,has advised motorists to cultivate the habit of complying with traffic rules.
Fawole gave the advice in Osogbo during a road show conducted by the committee as part of its awareness campaign to warn motorists against road accidents this festive season.
The committee chairman said motorists should on their own be able to obey the traffic rules and regulations without having to be apprehended by law-enforcement agents.
Plateau

The Plateau State Government has been called upon
to checkmate middlemen who buy rice at very cheap rates and resell to consumers at exorbitant prices during food shortage.
The chairman, Rice Farmers Association of Nigeria (RiFAN) in Plateau State, Mr Joshua Bitrus, made the call in an interview with newsmen in Jos recently.
“The middlemen often extort farmers by buying at very cheap rates and reselling to consumers at exorbitant prices during food shortages.
“It would be proper to include rice in the state government’s initiative in order to encourage farmers to continue to produce the commodity in large quantity and because of several advantages inherent in it,” he said.
Sokoto

The Deputy Chairman, House of Representatives
Committee on Water Resources, Mr Lasun Yusuf, said last Thursday that the Federal Government had spent more than N60 billion on water-related projects across the country this year.
Yusuf said this in an interview with newsmen in Sokoto on the sideline of the committee’s oversight visit in the state.
He said about N100 billion was earmarked for constituency projects in 2013, adding that the projects were located in the 360 federal constituencies nationwide.
“These projects include the provisions of motorized boreholes and their accessories, open-dug wells and tube wells, among others. 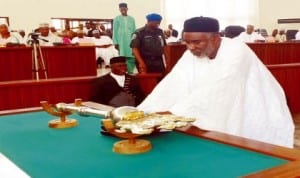 Governor Murtala Nyako of Adamawa State, placing the 2014 Budget proposal before the State House of Assembly in Yola, last Friday.

The Executive Director, Sahara Group, Kola Adesina, has called on various stakeholders to promote energy access in Africa, as lack of energy costs Nigeria and other African countries over $110billion annually.

He also urged the World Trade Organisation (WTO) on the need to galvanise the interest and support of various stakeholders to promote equitable global trade relations and energy access in Africa where almost 600 million live without electricity.

Adesina, who spoke on ‘Redirecting the World Trade Organisation’ at the virtual 2021 Horasis Global Meeting, said deploying multilateral engagements would help circumvent the status quo that has made global trade relations “somewhat lopsided.”

Horasis is one of the foremost annual meetings of the world’s leading decision-makers from business, government, and civil society.

Speaking on access to power in Africa, Adesina said the WTO should explore collaborating with the various stakeholders to accelerate the pace of technology needed to make alternative power cheaper and more accessible to the consumers.

Africa is home to 17 per cent of the world’s population, but accounts for just 4 per cent of global power supply investment.

On a per capita basis, power supply investment in Africa ranks among the lowest in the world and lack of energy costs the continent over $110billion annually.

“The Environmental Impact Analysis of conventional power sources should be the focal point of conversations with African presidents as well as key political and business leaders to ensure their support and agree to a collective and sustainable solution template.

“The WTO must ensure that multilateralism guides its decision-making. The countries of the world are not all on the same pedestal, there should be consideration for the poor countries.

“The WTO should create a system where countries come together to create a united front to handle the issues the world is facing,” he said.

Adesina explained that multilateral strategies would create “elastic solutions” that can be adapted with respect to the unique challenges and opportunities across global trade blocs.

He argued that while sustainability should be the ultimate driver of development, concessions need to be in place to effectively manage the current challenges of less developed continents.

He stated, “Africa still suffers from the twin challenge of access versus affordability of electricity. We all need each other to solve the global challenges we face as individual countries and the world.

“A strong commitment is needed to maintain open and free trade; to keep open borders and to help the poorest countries, particularly least developed countries, survive the economic shock created by the Covid-19 pandemic.”

The Horasis session noted that with protectionism gaining steam globally, the WTO would need to reinforce its influence on stabilizing global trade negotiations.

Experts expect that the WTO, under the leadership of Dr Ngozi Okonjo-Iweala would spearhead effective reforms that would make the organization play a strategic role in promoting equity and transparency in the quest for global sustainable development.

The Management of the University of Ilorin says the institution is interacting with the Association of Landlords within its communities to ensure the protection of students.
Dean, Student Affairs, Unilorin, Prof. Lanre Ajibade, at a news conference in Ilorin yesterday assured that no stone would be left unturned toward ensuring safety of students.
According to Ajibade, the University has been engaging in consistent interactions with the landlord association of the communities to ensure students who live in the area enjoy the best treatment possible.
He said that although no fresh and returning student of the University was set to resume the 2021/2022 academic session, many live off campus, particularly within Tanke and the neighbouring communities,
He recalled the recent murder of a female student of the University and said management had been working vigorously with security agencies to ensure perpetrators of the heinous act were prosecuted.
The dean noted that the University was working assiduously with all the security agencies and other stakeholders within and outside the institution to ensure the safety of the community.
The University’s Chief Security Officer, Mr Abdulwasiu Oyewo, also said that his personnel were working day and night to provide maximum security in the area.
Oyewo said that the security officers were in constant patrol of the environment, adding that vehicles with tinted glasses and without registration number would not be allowed on campus.
Also, Officer-in-Charge of the Intelligence Unit in the University’s Security Division, Mr Ali Na’Allah, said that the unit would continue to engage in discreet information gathering on campus.

A 22-year-old unemployed man, Akinwunmi Rotimi, yesterday appeared in a Magistrates’ Court in Ota, Ogun for allegedly stealing two iPhones, an Hp Laptop and other valuables.
The police charged Rotimi, whose address was not provided, with two counts of burglary and stealing.
The Prosecution Counsel, Cynthia Ejezie, told the court that the defendant also stole N240,000.
Ejezie said that the defendant committed the offence on April 3 at about 4 a.m.at No.6 Ayoola Adeyinka, off Tetiku road, Owode-Ijako, Ota.
He said that the defendant broke into the house of the complainant, Mrs Adeleye Anike.
She said that the police from the Sango-Ota Police Station, tracked one of the phones to the defendant.
The offence, the prosecutor said, contravened the provisions of sections 383 (1) and 412 of the Criminal Code Vol.11, Laws of Ogun, 2006.
The defendant, however, pleaded not guilty to the charge.
The counsel to the defendant, Mr Ambrose Aisedion, prayed the court to grant the defendant bail in the most liberal terms.
Magistrate Shotunde Shotayo admitted the defendant to bail in the sum of N250, 000 with two sureties in like sum.
Shotayo ordered that the sureties reside within the court’s jurisdiction and be gainfully employed with two-year tax payment to Ogun Government.
The case was adjourned until June 17 for a definite hearing.