As stakeholders continue
to mull over the Brazil 2014 world cup draw last Friday that pitched Nigeria in Group F alongside Argentina, Iran and Bosma-Herzegovenia, most Nigerians have agreed that the Super Eagles got a far draw.
However, the consensus is that the team must prepare very well and take every match as if it is the final.
Another position is that before Nigeria takes on Argentina in the final group match, the Eagles must have known their fate after going up against Iran and Bosma.
Coach of Sharks Foot Club of Port Harcourt, Sonny Isieokweinma described Nigerians group as a fair one, saying that Argentina is the only football nation in the group.
According to him, Nigeria and Argentina would qualify to the second round of the world biggest football tournament.
“We are in a fair group, and we cannot ask for more, but my worry is that Argentina and Nigeria are always falling into the same group.
“I believe that Argentina and Nigeria will qualify from that group F” Iseiokweinma said
Chief Coach, Rivers State Football Association, Tony Chuku in his opinion said that it is not automatic that Nigeria and Argentina would qualify from the group.
He said that the important thing at this stage is for the Super Eagles to work hard because any country that qualified for the world cup may not be a push over team.
He advised that for the Super Eagles to perform impressively the world cup, the Nigeria Football Federation (NFF) should ensure early preparation for the team.
He however believes that Nigeria has a good chance to pick one of the tickets available in the group, provided that all hands are on deck to move the Super Eagles succeed.
“Everybody in the administration of football should work hard, because poor/take preparations can cause failure”, Chuku said.
The Chief Coach warned that the super eagles should not under rate any team at the world cup, because surprises always come up at such tournaments.
Ex-sharks football player, Imigbelabia Fubara expressed optimism that Nigeria would qualify alongside Argentina.
He said that a part from Argentina and Nigeria, the other two countries were not known as football nations.
“My worry is that Nigeria has been in the same group with Argentina four times now, but all I know is that Nigeria and Argentina will qualify to the next stages” Fubara said.
Rivers State Hockey Coach, Simon Samuel, in his opinion said the sure way for Nigeria to qualify and perform impressively is for the coach to select the right players to the world cup.
He advised the Chief Coach of Super Eagles, Stephen Keshi to recall Osaze Odemwingie and Ikwchukwu Uche to beat up the striking force.
According to him, tournaments like world cup need strikes with experience.
“If the coach selects the right players, Nigeria will go beyond the second round, Samuel said. 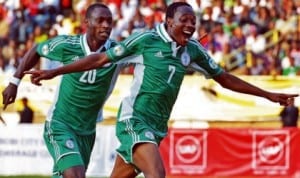