The Federal Executive Council (FEC) on Wednesday in Abuja approved the signing of an agreement for the development of the Lekki deep sea port in Lagos State.
The Minister of Transport, Alhaji Idris Umar, stated this while briefing State House correspondents on the outcome of the weekly FEC meeting presided over by Vice-President Namadi Sambo.
He said the seaport project would be executed at the cost of $1.345 billion (about N221.9 billion).
Umar said it would be executed through the Private-Public-Partnership arrangement, and has been concessioned to Messrs Lekki Ports LFTZ Enterprise for 45 years.
He said 20 per cent is for the Federal Government in terms of the project’s equity shares, with 18.5 for the Lagos State Government and 61.5 for the private investors.
The minister said 800 million dollars out of the project cost would be funded through debt financing, while the balance would be contributed by equity.
He said the seaport when completed would give Nigeria its first deep sea port since independence and end congestion at the Apapa port.
“The economic benefits of this port to this country and to the economy of the country in particular need not to be over-emphasised.
“Not less than 9.3 billion dollars will be accrued to the (Nigeria Ports Authority) NPA, made up of 2.6 billion dollars from marine services and royalties and then 6.7 billion dollars’ share of profits from the investments.
“Other benefits that will accrue will be the ripple effects of operation of the port from Customs charges and other economic benefits which will not be less than 379 billion dollars over the period of 45 years.
“The ports will create jobs of not less than 162,000. It is therefore of immense benefit to the economy of this country. Therefore, that underscores the need for us to have this deep sea port.”
The minister further stated that the port would automatically revert to the Federal Government at the end of the concession period.
Also speaking, the Minister of State for Works, Alhaji Bashir Yuguda, said FEC further approved about N30 billion for the construction/rehabilitation of some roads across the country.
He said the road projects were meant to fast track the development of infrastructure and boost socio-economic and agricultural activities.
“The projects include the construction of Kankara-Gurbi road in Katsina State at the cost of N1.4 billion and theconstruction /rehabilitation of Yashi-Duguri-Yalo Road in Bauchi State at the cost of N1.75 billion.
“Also, there is the construction of Isoko Ring Road in Delta at the cost of N2.1 billion and the Jarmai-Bashar Road in Plateau State at the cost of N1.38 billion.
Others include the rehabilitation of Wukari/Akwana Road in Taraba at the cost of N3.97 billion, and the construction of Ajase/Offa/Erin-Ike/Osun State Boundary Road in Kwara at the cost of N1.24 billion.
“There is also the Takum-Dongawa Road and Katsina-Ala at the cost of N1 billion, and the rehabilitation of Amanwaozuzu-Uzoagba-Eziama-Orie-Amaohia road in Imo which will gulp N1.275 billion.
“The rest will see N1.48 billion being spent on the construction of River Ebba Bridge at Cheche, Katcha Local Government Area in Niger, and the construction of Bida-Sacci-Nupeko Road in Niger which will gulp N8.673 billion,” Yuguda said.
In his contribution, the Minister of Information, Mr Labaran Maku, told State House correspondents that the National Good Governance Tour would resume with a visit to Kaduna state on Saturday.
He also stated that the Minister of Sports, Malam Bolaji Abdullahi briefed the council on the forthcoming National Youth Games (NYG) billed to start this weekend in Abuja. 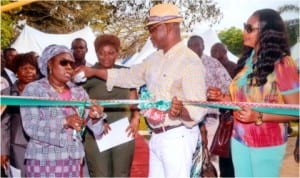 Representative of the wife of Rivers State Governor, and Commissioner for Women Affairs, Mrs Joeba West (left) cutting the tape with the assistance of her Commerce and Industry counterpart, Barr Chuma Chinye, at the opening of the 3rd Port Harcourt Xmas Discount Market in Port Harcourt , yesterday.
Photo: Chris Monyanaga