As the country gears up
for a National Conference next year, some stakeholders from Rivers State say resource control should  top agenda for those that will represent the Niger Delta.
Former Dean, Faculty of Engineering in the Rivers State University of Science and Technology (RSUST), Prof Alex Akor in a chat with The Tide last Monday in Port Harcourt said since the Niger Delta had over the years fought for equitable benefit from its huge petroleum resource without success, the conference would provide platform to seek for resource control.
Prof. Akor lamented that the people of the area had   suffered hugely from the environmental pollution as a result of  crude oil exploration but had nothing on ground because of the poor allocation formula.
“For me, resource control is the only way the proceeds from the oil can be enjoyed in the region’’ said Prof Akor.
“Over the years, he argued that the people of the region have suffered environmental and health hazards from oil pollution without any adequate attention from the federal government, life expectancy is getting shorter everyday and people from this region are dying of strange diseases’’.  ‘’ So, this is the time to talk on how we will stay together in the future’’, he said.
The university don also insisted that outcome of the conference should not be sent to the National Assembly for endorsement, but rather a referendum should be conducted for the citizenry to vote on the issues.
The Agriculture engineering expert believed that if the outcome was sent to the National Assembly it might be politicised and the essence of the conference defeated.
“ I think referendum is the direct outcome from the people. I believe that if the outcome of the conference is not politicised, it will help keep Nigeria standing on a strong foundation’’.
On his part, paramount ruler of Elieke community, Rumuokoro, Chief Clement Oku- Wabara called for interface between the National Assembly and the National Conference.
He opined that the interface would help solidify the outcome as it would be enshrined in the constitution by the legialators.
The traditional ruler said one way to encourage public support for the conference was for the organisers to have,’’ no restrictions on issues for debate’’.
Chief Oku-Wabara added,” Nigeria belongs to all of us, so if they say there are no- go areas then it will not help the system’’.
He also recommended that all sections of the society should be represented including market women, non-governmental bodies and labour unions, saying “ the conference is long overdue this the time to talk of our future as a country.’’ 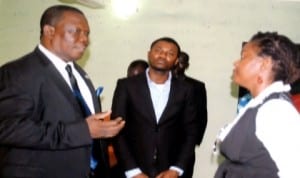 Special Adviser to the Rivers State Governor on ICT, Engr Goodliffe Nmekini (left) chatting with Executive Director, Keeping it Real Foundation, Mrs Bitebo Gogo, during the donation of computers to the foundation in Abuloma, Port Harcourt, yesterday. With them is the Operation Manager of the foundation, Mr Brendan Dumpe
Photo: Egberi A. Sampson

The President of Government Secondary School Ogu(GSS Ogu) Old Students Association in Ogu/Bolo Local Government Area, Rivers State, Hon. Osaki Asobari has advised old students associations in Nigeria, particularly GSS Ogu, to assist and support their alma mater for improved performance.
He said that the benefits of assisting Alma maters are enormous, saying that there is always joy to see students of  your former school performing well in academics, sports and all other useful activities.
Asobari, gave the advice last Sunday at the association’s second quarterly meeting in Port Harcourt, Rivers State.
He stated that as old students, they were  duty-bound to ensure quality standard of learning by contributing  financially and materially  in order to achieve set objectives for the school.
The president revealed that plans were on top gear to celebrate the school’s golden jubilee, end of year thanksgiving service and award ceremony for deserving students.
“Today, we are all proud to be associated with this noble frontline centre of excellence which has produced prominent leaders and citizens of various fields of endeavour in this country.
Old students of GSS Ogu have done wonderfully well and therefore we should justify it by our support for greater results.
As old colleagues, we shall continue to come together quarterly to appraise our concerns  over our revered institution” Hon. Asobari said.
The President lauded the state Governor, Barrister Nyesom Wike, for restructuring the school complex, installed with modern facilities for sound academic works.
Asobari further, commended old students like Senator representing South-East senatorial district, Seen.  George Sekibo, Director of Finance Niger Basin Development Authority, Alabo Francis Ebenezer, the current Chairman of Of/Bolo Local Government Chairman,  Hon.Vincent Nemieboka , Member representing Ogu/Bolo  in state House of Assembly, RtHon. Evans Bipi and many others for their commitment and support to the school all times and advised members to always attend meetings.
He finally urged  old  students to be part of all activities to actualize set goals.

Rivers State House of Assembly Committee Chairman on Judiciary, Hon. Solomon Sokolo, has hinted of plans by the House to amend some aspects of the state anti-cultism law.
He dropped the hint when he led members of the committee on a visit to the new State Chief Judge, Justice Simeon Amadi recently in Port Harcourt.
Sokolo explained that the plans to amend the law was to allow Magistrates courts handle such cases.
Recall that the law had been amended previously, such that most of the cases are handled by High Courts and many suspects are still awaiting trial.
On his part, the Rivers State Chief Judge, Justice Simeon Amadi, had sought for the review  of the Rivers State Anti-Cultism  law, to allow Magistrates handle cult related  cases, so as to reduce the number of inmates on  awaiting trail at the correctional centers on such offences
Justice Amadi reasoned that amendement will also reduce backlog of cases and fasten justice delivery.
The State Chief Judge also pleaded for the activation of the multi court house law to give special courts powers to handle lesser cases such as family matters  so as  to reduce the number of cases before judges
On his part, Chairman House Committee on Judiciary, Solomon Sokolo, while speaking to journalists assured of the willingness of the house to amend the anti-cultism law, to allow magistrates handle cult related cases.

Andoni Local Government Area Chairman, Barr Erastus Awortu, has called on traditional rulers, chiefs and stakeholders, who believe in the peace and development of the local government to rise and work with the council to rescue the area from miscreants, saying that the era of darkness is over in the area.
Awortu made the call when he led some Andoni refugees in Ogoni land in Isiokwan district of the area, back to their various communities last Wednesday.
The chairman said it was obvious that some communities’ members including some chiefs and stakeholders had not only lost capacities to solve the insecurity problem plaguing the area, but suddenly became informants to some of the cultist brothers and friends.
“It is unfortunate that all of us are parts of the insecurity problem plaguing our communities, this is because some of us including some chiefs have already taken side with some of the miscreants, may be, to attract their support to our chieftaincy struggle, some of us have sympathy for them as brothers and friends.
“Some of us even served as informants to the boys, but let me tell you, cultists don’t have brothers, they do not have any father, neither mother nor sister, they also have no secrets, whatever dealing you are having with them is already known by the opponents, and so when they are coming for their opponents, they also attack you as informant and sypathisers to their opponents.
“I am pleading with all of us, including the chiefs to shun the cult boys in our families and communities let us come together to fight against the activities of the miscreants. Our houses are being destroyed on daily basis, no development is coming to our area, innocent lives are going down every day, our economic activities are stagnant, our children are no more going to school, we are gradually going backward, what benefits do we have?
“Enough is enough, I have already given my consent to security men, not to spare any of the criminals and their informants, if they refused to drop their guns, the era of darkness in Andoni is over.
“We are not against any person or group, but we will not allow any person or group to enter any of our communities with weapons, we must chase them away or bring them to face the wrath of law in the state.
We are also ready to receive any genuine repentant ones and even make them live a normal live,” the chairman warned.
Erastus used the opportunity to flag-off 20,000-gallon capacity tank water project at Ibotirem Community in Isiokwam District of Andoni LGA.
According to him, his administration has commenced the water project as proactive step to check cholera outbreak ahead of the dry session, usually associated with the disease in Nigeria. “Andoni is an area where cholera is almost endemic, basically because we lack potable water; so, the provision of potable water is one of the cardinal concerns of my administration.
“We will ensure that we banished cholera out of Andoni.”
Awortu explained that while the council administration endeavoured to ensure the safe return of displaced person, it would also ensure that the area no longer remained vulnerable to cholera.
He said “just as we are trying to ensure the safe return of displaced persons, we also find it necessary to provide potable water in the communities to check cholera, which leads to deaths during dry season.