Ahead 2015 general
elections, the Independent National Electoral Commission (INEC), Rivers State says it would commence voter registration soon.
Resident Electoral Commissioner ( REC) of INEC, Rivers State, Elder Aniedi Ikoiwak stated this recently during a meeting with political party leaders in the state INEC headquarters in Port Harcourt.
According to the REC, unlike the voter registration exercise of 2011, the forth-coming registration exercise would not be done in the polling units.
“The Continuous Voters Registration (CVR) will soon kick-off in the Registration Area Centres (RACs ) at ward levels in the state, instead of the polling units as was the case in the 2011 registration exercise”, he said.
He further explained that the CVR would afford various categories of persons the opportunity to be duly registered.
Such categories of persons, he continued, include: those who were not properly captured during the 2011 registration exercise, those who have turned 18 years after the last exercise, and those who did not register in the last exercise.
Ikoiwak also urged political party leaders to ensure that their wards did not get involved in double registration, which, he warned, was punishable by law.
In the same vein, the state REC informed the party leaders that INEC was preparing to conduct the delimitation of constituencies.
According to him, “this time, the commission would collaborate with professional agencies like the National Boundary Commission, Nigeria Postal Services, office of the Surveyor-General of the Federation, and National Space Research and Development Agency for a successful exercise”.
He explained that the exercise was designed to ensure that the people were adequately represented in legislative houses in the country.
“Partnership with these government agencies will ensure that the final document produced after the exercise has full legal backing”, he said. 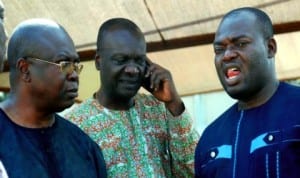