Principal officers of the New Peoples Democratic Party (nPDP) summoned to appear before the National Disciplinary Committee of the ruling PDP on November 27 may not do so, The Tide learnt.
PDP National Secretary, Prince Olagunsoye Oyinlola, New PDP National Chairman, Alahji Abubakar Kawu Baraje, Deputy Chairman, Dr. Sam Sam Jaja, and the National Vice-Chairman, North West, Ambassador Ibrahim Kazaure, last Wednesday received the invitation of the committee headed by Second Republic Minister of Transport, Alahji Umaru Dikko.
The National Publicity Secretary of the new PDP who disclosed that those invited may not honour the invitation described the committee as an illegal contraption.
A statement by the National Publicity Secretary of nPDP, Chief Eze Chukwuemeka Eze stated that “the PDP Constitution does not recognise the existence of the so-called Dikko Committee as due process was not followed in its establishment”.
“We have read from some of the national dailies of the alleged summoning of the PDP National Secretary, Prince Olagunsoye Oyinlola, the New PDP National Chairman, Alhaji Abubakar Kawu Baraje, National Deputy Chairman, Dr. Sam Sam Jaja, and the National Vice-Chairman, North West, Ambassador Ibrahim Kazaure, by the PDP Disciplinary Committee said to be headed by the Second Republic Minister, Alhaji Umaru Dikko, the statement said, adding that neither the aforesaid leaders nor any other nPDP member for that matter would appear before the Dikko Committee.
“The Committee is an illegality and alien to PDP and its members. It is not our intention to confer legitimacy on such an illegal contraption by self-serving politicians intent on destroying a house the building of which they were not part,” it continued.
The release explained that the constitution of the party clearly spelt out that a disciplinary committee can only be operational when the National Executive Council (NEC) of PDP sits and approves it.
“In the absence of any such approval by the PDP NEC, whatever function the committee is deemed to be performing is null and void”, it said describing the committee as an insult and an attempt to pass through the back door to confer underserved credibility on an illegal contraption.
According to the statement, Alhaji Dikko as the National Chairman of United Democratic Party (UDP), could not jump ship to chair an illegal body in PDP as if PDP lacks credible people that can perform the task without creating problems for the party.
It further alleged that Dikko accepted the task because Alhaji Bamanga Tukur felt like using  the appointment to thank him for helping Tukur secure the gubernatorial ticket of the defunct Gongola State during their days in the defunct NPN.
The nPDP challenged the Dikko Committee to prove its seriousness by starting with the trial of Tukur and his cohorts for anti-party activities, specifically as displayed during last weekend’s gubernatorial election in Anambra State, saying instead of supporting PDP, they aligned with the APGA candidate, Chief Willie Obiano, thereby making mockery of the efforts of Comrade Tony Nwoye.
Tukur and his promoters, the release said had demonstrated enough disdain and hatred for the progress of PDP as a party, remarking that the ploy was aimed at ensuring that APGA adopts  President Goodluck Jonathan as its presidential flag  bearer come 2015.
“The Committee should investigate this show of shame and discipline Tukur and all those involved in this wicked act against a party which they are in a hurry to destroy even when they cannot tell the story of how it was formed”, the statement said. 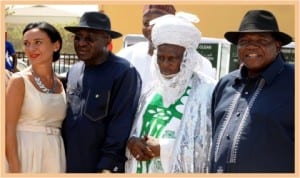