Mrs. Franca Eke is a
Nigerian resident in Abidjan, Cote d’Ivoire’s economic capital. Eke sells second-hand children’s wears at the famous Market in Bellville Treichville.
Eke recalls that she and her husband arrived in the West African country some 10 years ago, and had their three children there.
“ Since the 10 years we Have lived here, I have done this business for four years. Before then life was like hell, it was difficult to put food on our table,” she recalled.
For Eke, doing business in the Bellville second-hand clothing market is like trading in any Nigerian market.
“ When you are here, you are at home, we speak our local languages   and we speak English only when we have customers who cannot understand us,” she said.
Nigerians dominate in the second-hand cloth business activities at the Belleville market, while Ghanaians are more visible in the sale of second-hand bags and shoes.
For a Nigerian first-time visitor at the market, the melodious tune of Nigerian gospel music is a welcome entertainment.
The tunes and other popular Nigerian music make the atmosphere seem like New Market Aba, Onitsha Main Market, or the Alaba International Market in Lagos.
“ The first time I came here, I felt as if I was shopping in Aba, the same market that attitude is found in Aba and Onitsha has-been brought here.
“ Local Nigerian gospel music is a good treat that makes one feel at home. Being quite new at the time, I felt at home because I did my bargaining in Igbo and English,” says Mrs. Ada Kelechi, a Nigerian resident in Abidjan.
Another Nigerian, Mr. Chikezie John, have you deals on female blouses and skirts, says the huge presence of Nigerians in the market is a source of encouragement for the traders and buyers.
“ Other nationals are intimidated by our huge presence here, we are very much focused on our businesses, and we have remained very united as a people.
“ Others feel intimidated when they see the level of cooperation among Nigerians doing business in this market,” he said.
Even as organised as the Nigerians are, some people have questioned if it is all rosy for Nigerians in Cote d’Ivoire.
Observers are quick to note that there are many jobless Nigerians’ in this country, as John says it is shameful for a Nigerian to beg for alms in the streets of a foreign land.
“ When you look around, there are many Nigerians who are physically fit are  the streets begging for survival, this is shameful.
“ There are a lot that can be done, all we need is to be vigilant to recognise such opportunities, and muster the courage, to take business risks,” he said.
John says he left Nigeria for Abidjan after his effective National Youth Service Corps scheme in 2002, and was jobless for more than three years.
“ My search for a job was fruitless, so I had to find something to do, and today I am a major supplier of second-hand wears to other dealers,” he said.
Eke and Paul are two out of the many Nigerians who took advantage of the second-hand clothing business in Cote d’Ivoire.
The population of the Nigerian community’m his country is estimated at about two million, one of the highest anywhere in the world outside Nigeria.
With the protocol on free movement of persons and goods within the ECOWAS sub-region, many Nigerians have had to move daily to Cote d’Ivoire, Abidjan especially, Malthus fueling the number of jobless Nigerians in the city.
However, it is mostly described the involvement of Nigerians in second-hand clothing business in the Belleville market as a mark of hard work and resilience worthy of emulation.
Mr Bright Moses, President, Nigerian Youth Association, Cote d’Ivoire, says that Nigerians doing business in Bellville market are a source of pride to the Nigerian community there.
“ To those of us representing Nigeria as youths or community leaders, Bellville is a market Abebooks web use to demonstrate Nigerians’ sense of industry.
“ Even the host country is aware that there are serious minded Nigerian tradersin this market, the dominance of Nigerians in Bellville market makes us happy and proud,” he said.
The efforts of Nigerian traders at the market encouraged some Iveinans to develop business consciousness as they take advantage of it to make their own living.
Such is one Ivoirian Dieudonne Kone who  canvasses patronage for Nigerian traders. He says he was spurred to find something to do when he saw that were making good foreigners living out of the market.
“ I come here every morning and look out for people who come for shopping, I take ‘them to my Nigerian friends and ask whether they have sold here. Whatever is added is given to me. It has-been a source of terrain for me.
“ I have respect for Nigerian traders in the market, they are never tired, and they have made many of us realised the opportunities around us,” he said.
Chief Ejike Williams, an Abidjan-based Nigerian businessman and Vice President of the Nigerian Community in Ivory Coast, says the level of idleness among Nigerians’in this country required the action of the federal government.
“ Truly, many of our youths in this country are without jobs, and this has opened the gate for engagement in some activities that are not right.
“ But here in this country there are opportunities that can be harnessed with the right take-off power.
“ We hear of government’s credit schemes for Small and Medium Scale Enterprises (SME), this can be extended to our youths who are idling away here, because a Nigerian remains the same anywhere he is located.
“ We must know that at the end, Nigerians who make it in foreign lands have always returned to invest. So the government needs to look into this,” he said.
Analysts say with the right financial empowerment by government, many idle Nigerian youths abroad can be made to go the right path of self-reliance and stay out of trouble in foreign lands.
Okeh writes for News Agency of Nigeria 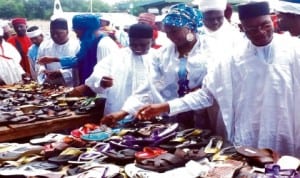 By: Kayode Adebiyi
Adebiyi writes for News Agency of Nigeria.

By: Chidinma Agu
Agu is of the News Agency of Nigeria.