This year’s Onye-Ishi
Etche Traditional Wrestling Competition among clans in Etche Local Government Area, Rivers State has ended last Friday with Onyedikachi Okere from Igbo clan emerging champion.
Also, Emeka Egbegbu from Mba Clan came second while Ubaneze Nwafor from Ulakwo/Umuselem clan won the third position.
Speaking earlier while declaring the event open, His Royal Emminence, Eze Emmanuel N.B. Opurum said the competition was organised to mark the closing ceremony of 2013 new yam festival among communities in the local government area.
Eze Opurum advocated for the inclusion of cultural education in the school curriculum at all levels in the country.
He said that the call has become necessary because the impact of cultural education in communities today was  minimal.
Describing new yam festival as cultural heritage of Etche people, the traditional ruler noted that the area attaches great importance to the event as predominant farmers.
“Each year at this time, every community celebrates annual new yam festival. For over one month, the festival has been on. It is an occasion when Etche farmers harvest the first yield of  their yam.
“They do not eat it alone but invite their inlaws, friend and relations to pose with his buoyant yield and also eat it together with the family”, Opurum remarked.
The monarch lauded the people for upholding their cultural heritage while thanking the Cultural Officer, Charles Nweke for the high level of handling cultural and traditional matters in Etcheland.
Also speaking, the Chairman of Etche Local Government Area, Barrister Reginald Ukwuoma promised to continue to sponsor programmes that promote the cultural heritage of the people.
Presenting the cash prize of N50,000, N30,000, and N20,000 respectively to the winners, His Royal Majesty, Eze M.O. Ojiegbu Omu II of Omuma lauded participants for exhibiting the  spirit of sportsmanship during the competition.
In the same vein, the Chairman of the occasion Eze Ken Nwala, Ugo I of Etcheland also presented the sum of N30,000 N20,000 and N15,000 to the winners of the competition. 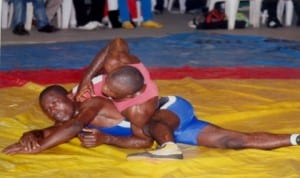 Wrestlers battling for honours during a national event in Port Harcourt, recently