The Senator, Represent
ing Rivers South-East in the National Assembly, Senator Magnus Abe, has canvassed unity among the Ogonis, blaming the non-implementation of the United Nations Environment Report (UNEP) on wickedness on the part of the federal government.
Senator Abe, who stated this yesterday, during  the 18th memorial service of the Ogoni heroes who died in the struggle to liberate the area, revealed that he had exhausted all peaceful avenues for the implementation of the report which was released two years ago, but regretted that government had refused to clean up the area without reasons.
According to him, “We fight for justice and justice is for everybody and not for the Ogoni alone.  We have been patient and nobody can say we have not been patient enough. On my own, I have tried to bring our case to the knowledge of the government.  The federal government has promised  us that when the report is out, they will implement it, but unfortunately, they have not done anything towards that direction”.
“If there is no truth, there will be no progress, if we gather  with the aim to cheat one another, then it will lead or make us undermine one another and Nigeria will go nowhere”, he said.
Abe warned that without truth and justice, there would be no progress, adding that “we cannot have a country where we do not know how many we are. “We have a country based on the sharing of  resources, the reason or indices for the sharing is not known to anybody, we share by population.
Continuing, he said:  “are we having representative by population?  Are we allocating resources based on contributions?  Nothing is done in the country based on fairness, justice and truth, that is why we are not making progress despite the struggle”.
Abe however, advised that we should be talking about truth and justice, explaining that the Ogoni struggle is not about the Ogonis, but about lives of everybody including the Hausas, Igbos and Yorubas as well as others who benefit from the struggle.
He noted that every Nigerian will benefit from truth and justice, if we have a country that adheres to the tenets of truth and justice.
Speaking at the occasion, the President of Khana, Gokana, Tai and Eleme Local Government (KAGOTE), Dr Peter Meene, assured that it would support all the projects and policies of MOSOP  towards the development of the area, revealing that the organisation had sent three petitions to the government over the non-implementation of the UNEP report.
Meene noted that the petitions were sent to the Presidency, the Senate and the House of Representatives, stressing that the organisation shall use all legitimate means to ensure that the federal government implemented  the report which he pointed out concerned lives and future of the people of Ogoni.
According to him”, we must support every programme and policy of MOSOP, we must ensure the sustenance of the struggle of our founding fathers.
We shall no longer negotiate it, whether they like it or not, the report must be implemented if they want us to still remain in Nigeria state.
We shall not negotiate it and we will use every legal means to ensure that implementation is carried out.  We shall continue with our nonviolence approach but not to lose focus”, he noted. 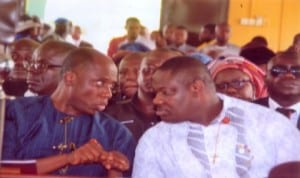