Concerns about the declining revenue to states and local governments accruing from the federation account and its impact on national socio-economic development once again came to the fore at the sharing of the allocation for October by the Federal Accounts Allocation Committee (FAAC) in Abuja, yesterday.
The federal, states and local governments shared N568.41 billion for the month of October which was N45.92 billion lower than the amount shared in September, a development finance commissioners of the states of the federation had deplored.
Chairman, Forum of Commissioner, FAAC, Timothy Odah, said the allocation for the month was the worst in the year, adding that the states should do shelving or realignment in their expenditure by focusing on priority projects.
The chairman, however, commended President Goodluck Jonathan for approving the release of $1 billion from the excess crude account for distribution.
We appreciate the magnanimity of Mr President and we also mourn the dearth of funds in the country,” he said.
A breakdown of the amount shared which was made available the Minister of State for Finance, Dr Yarima Ngama, showed that the Federal Government received N213.82 billion, state governments N108.45 billion while local governments got N83.61 billion.
He said the oil-producing sates would receive their 13 per cent derivation funds of N47.11 billion, compared to the 53.65 in September, representing a decline of N6.54 billion.
Ngama said the country received N443.05 billion revenue from mineral resources in October, compared to N431.07 billion received in September, representing an increase of N11.98 billion.
Similarly, non-mineral revenue generated in October amounted to N96.5 billion, compared to N94.54 billion generated in September, representing an increase of N1.96 billion.
The minister said no fund was proposed as augmentation during the months under review, but added that N80.65 billion was transferred to excess crude account for distribution.
“The funds available for distribution had been adjusted with transfer to excess crude and this month, we have transferred N80.65 billion to excess crude account,” he said.
It would be recalled that accruals to the three tiers of government had remained on the downward slide since the beginning of the year, a development that had attracted disapproval from state governors and the chairman of the Nigeria Governors’ Forum and Rivers State Governor, Rt. Hon. Chibuike Rotimi Amaechi.
For instance, while N886.402 billion was shared in February, the figure dropped to N731.113 billion in March and N721.505 in April.
The amount shared among the three tiers further dropped to N620 billion in May, witnessed a marginal increase to N718 billion in June and dropped to N715.8 billion in July. It had remained on the downward trend ever since. 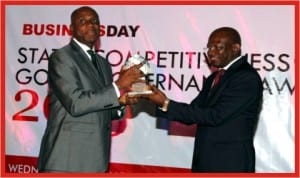