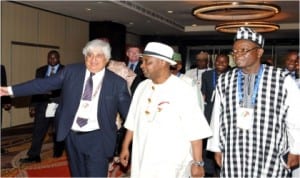 In tune with the position of the Rivers State Governor and chairman of the Nigeria Governor’s Forum, Rt. Hon. Chibuike Rotimi Amaechi, the leadership of the senate has thrown its weight behind the creation of state police.
President of the Senate, David Mark and Senate Leader, Victor Ndoma-Egba, were among those who spoke in favour of state police at plenary yesterday, echoing the position of Governor Amaechi who had remained vocal in his conviction that the creation of state police would promote true federalism and effective policing of the federation.
Contributing to the debate, Senate Leader, Victor Ndoma-Egba, opined that the time was ripe to create State Police, saying that the Nigeria Police Force is suffering from “structural defect”.
Ndoma-Egba spoke further: “The mentality of the police is still rooted in our colonial history.
“No matter how much you bring, you are not going to change the police. “The idea of a single police for all the country is inconsistent with a federal system. “This motion affords us the opportunity to restructure the police in line to what is obtainable in federalism.”
The Senate leader’s position was supported by Umaru Dahiru (PDP-Sokoto), who also canvassed for creation of State Police, adding: “I will certainly support the creation of State Police as 2015 approaches.
“As it is today, nobody can trust the Federal Police to provide security for the people.
The time is ripe for us to include State Police as key issue for discussion at the national conference.”
Senator Smart Adeyemi (PDP- Kogi), in his contribution, stressed the need to reappraise the manner police funds are being disbursed.
According to Adeyemi: “We need to find out what is happening to their allocation and how money is being disbursed to the Police. “There is nothing wrong with having a State Police.
“We must begin to look at ways to make a policeman committed and passionate about his job by providing them with the good things of life.”
Senator Oluremi Tinubu (APC-Lagos) also backed the call for State Police, saying the issue deserves all seriousness and should therefore, not be trivialized.
Tinubu said: “The entire nation is not happy with the Police. “We requested for State Police but many of us voted against it here. “We as the Senate can do something about it right here before it even gets to the national conference.”
Deputy Senate President, Ike Ekweremadu, said the lawmakers must take a decision to secure the nation, calling for urgent decentralization of the police.
Ekweremadu said: “About N140 billion had been made available for the reforms between 2010 and 2013 but unfortunately with these huge funds, we are not going to achieve anything with the Police. “We must make up our minds to secure our people by decentralising the Police.”
On his part, the Senate President, David Mark, also backed those calling for creation of State Police to effect structural changes for effective policing.
Mark said: “I used to be a strong advocate of federal government police or central police.
“I am sure you have noticed that sometimes ago I also changed my mind to say that maybe we should experiment with State Police and see what it is. “There are basic problems with the current system but we must try to address them in a manner that has nothing to do with politics in any form at all because if this country does not survive, we will not play politics also.”
Meanwhile, Senate yesterday resolved to investigate whether the sum of N135 billion released for police reforms between 2010 and 2013 had been judiciously spent or not.
This followed a motion tabled at plenary by Abubakar Tutare (PDP-Taraba) on the level of funding and implementation of the Nigeria Police Reform Programme.
According to Tutare, despite huge sums already committed into the reform programme, there is nothing to show for it.
Consequently, the Upper Chamber mandated its Committee on Police Affairs to look into the books of the police as it relates to the reform programme.
In 2010, the Federal government came up with a reform agenda, which is aimed at addressed lack of offices, residential accommodation, operational vehicles as well as communication equipment so as to make the police more professional.