Governor Chibuike Amaechi, Wednesday, in Lagos, beat eight other governors in the federation to clinch the BusinessDay best Governor in Education Development. Other governors nominated for the award include Akwa-Ibom, Edo, Gombe, Imo, Kano, Ogun, Osun and Oyo States.
Apart from being chosen for his huge educational projects in the area of the new model primary and secondary schools, other criteria that gave the state governor edge over others include  consistent and noticeable increase in the pass rate of students from the State in WAEC and NECO exams.
The organizers also considered performance trend in competition by public schools in the state, increased enrolment in WAEC and NECO exams, with additional marks given for the quality of pass marks.
Publishers of the BusinessDay Newspaper, Frank Aigbogun further said the awards were to promote State’s competitiveness and good governance.
He lauded various state governors for delivering the dividends of democracy in their various States, while noting that each state across the country was uniquely presented in the BusinessDay State of the State’s report.
Aigbogun added, “how well we are doing in our blueprint tenets of democracy for our people that we especially focus on what the State governments and governors are doing in this particular regard. So we started work on our first states/ competitiveness report. I am delighted to say that in the course of the work that we did researching and preparing that report, that across the states you could find pockets of indeed great works by many of our state governors”.
In the same vein, the Editor of BusinessDay, Phillip Isakpa stated that the paper carried out painstaking  research and assessment on the achievement of individual governors in the country for the different awards in 13 categories.
Meanwhile, Governor Amaechi has dedicated his award to Rivers people and for Nigerians.
The governor has pledged to consistently improve on education and the quality of life for the upcoming youths and a better future for Rivers children.
Meanwhile, Chairman, House of Representatives Committee on Petroleum Resources (Downstream) and representative, Andoni/Opobo-Nkoro Federal Constituency, Hon. Dakuku Peterside, has described Rt. Hon. Chibuike Rotimi Amaechi who yesterday received award by Business Day for States’ Competitiveness and Good Governance as a man of uncommon courage and character.
Peterside who attended the colourful award ceremony which held in Lagos commended Business Day for selecting Amaechi and for showing rare bravery in their choice especially in this season when any act of courage is easily misunderstood.
According to Peterside, “we are not surprised that he was selected for this award. For a man who has dedicated his entire life to the service of his people, this award is not only fitting but encouraging. We are therefore happy that his achievements resonate beyond our state”.
Continuing, Peterside added: “Governor Amaechi will continue to disappoint his detractors because of the strength of his character, courage and focus. And for his teeming admirers, we are optimistic and confident that he will end well because he is already leaving lasting legacies in Rivers State. Award by Business Day for States’ Competitiveness and Good Governance is part of that celebration that is already echoing beyond Rivers State.
It will be recalled that Business Day gave out the award in 13 categories and Rivers State won in a number of categories. Governor Chibuike Amaechi of Rivers State carted away the Best Governor in Education Development award.
The lawmaker therefore prayed God to grant Nigeria more individuals in the mould of Amaechi. “Nigeria needs more Rotimi Amaechis to speak truth and courage whenever the need arises. That is the only way to build our nation and escape God’s judgement”. 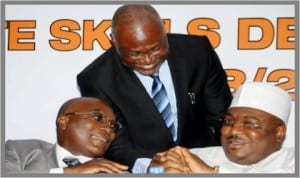 Jonathan To Address NGF In Sokoto