The World Bank has approved the sum of 1.7 million dollars to the Rivers State Government to tackle youth unemployment through the State Employment and Expenditure for Result (SECFOR) project.

The state Commissioner for Budget/Economic Planning, Mr Gogo Levi Charles disclosed this in an interview with newsmen in Port Harcourt shortly after a meeting with representatives of SEEFOR project in his office.

Mr Charles said that the money would be used for the creation of job opportunities for the teeming unemployed youths of the state.

According to him, government plans to engage youths in the state in the area of road constructions, cleaning of gutters amongst others.

The commissioner also said that the Amaechi-led administration was committed to ensuring that every project executed in the state was in accordance with the yearnings and aspirations of the people, noting that the government was bequeathing a legacy of transparency and accountability to the people of the state.

Meanwhile, at the meeting, he said that before the commencement of SEEFOR project in the state, the government had started a whole lot of reforms in the area of public and financial management, noting that SEEFOR coming on board was a welcomed development.

“Having done all the necessary things, implementation should start”, he said.

The commissioner also commended the World Bank for the gesture, adding that the people would be made to benefit maximally from the programme. 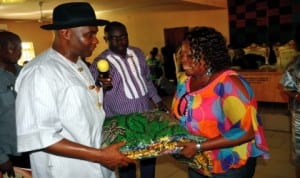