Apparently  taking advantage of the non monitoring of the normal monthly sanitation exercise in Rivers State for four months running, some residents of Port Harcourt have decided to go back to their old ways.

Investigations by our correspondent on the 2nd of November indicated that most residents of Port Harcourt were not involved in any form of cleaning their environment despite the announcement to the contrary by the sanitation authority.

Although for the past months that sanitation was not monitored, people were advised to clean their environment all the time.

A cross section of residents spoken to by our correspondent on the development said it was counterproductive.

For Chima Okere, it was wrong for people to wait to be compelled before cleaning their environment.

According to him, the sanitation authority under Ade Adeogun has set a precedent and it was left for the residents to sustain what has been put on ground.

For Kitoye Dede, a refrigerator technician, it was unfortunate if people would only wait on the first Saturday to clean their environment.

He opined that one should always clean his or her environment but the last Saturday should be a major one since government has made it mandatory.

At the motor spare parts market however, some of the traders spoken to said they clean the environment each day they go out for business.

One of the traders, Mr. Ike Jonas who spoke to our correspondent said  leaders at  the market were encouraged by the work done by the sanitation authority and pledged their support in that direction.

On the common practice of playing football even on sanitation days at the spare parts market area, Mr. Jonas said the youths had since been called to order.

He said the traders would not come to the rescue of any of their members who flouts the sanitation laws of the state.

However for Mr. Johnson Dike a transporter, monitoring of sanitation should be sustained in order to instill in the citizen the need for a clean environment.

According to him, since our drainage system was not world class, there was need for sustained cleaning to avoid the accumulation of dirt and debris.

He was of the opinion that genuine  excuses like examinations and other government important functions could be allowed even as he said skeletal monitoring should be explored.

But for Lucy Amadi, it was a matter of attitude. She said one should not be surprised to know that many people are happy that sanitation has not been monitored for some months.

She said this was because when sanitation was observed as at when due people still defaulted in one way or the order.

As at the time of going to press, efforts to speak with the Rivers State Sanitation Authority’s spokesman, Olalekan Ige was not successful. 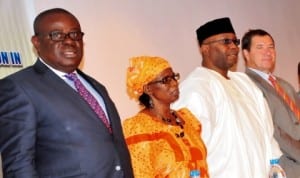 The Cleanup Nigeria campaigns group has promised massive tree planting programme across Rivers State.
River State team leader of the group, Mr Kingdom Nwanyanwu said this on the sidelines of the just concluded World Environment Day celebration in Port Harcourt
Nwanyanwu who decried the continous cutting down of trees said time has come for the habit to be discouraged.
He said people should be advised to plant more trees rather than cut them down, adding that trees not only provide fruits but also help in reducing the quantity of carbondioxide.
Nwanyanwu also stressed the need for members of the society to cultivate the habit of waste separation.
“We should be able to separate our waste cellophane bags, plastics and bottles take hundreds of years before it can decay. They should be separated and properly disposed off”.
“The term leader also condemned the indiscriminate refuse disposal in the state.
He stressed the need for the government to setup a mobile court that check the activities of people who go against the sanitation laws of the state.
“The government should setup a mobile court to apprehend people who also violate the law”, he said.
Nwanyanwu said the cleanup campaign has done a lot of work in areas of cleanliness around markets in Port Harcourt, schools and other public places.

Four children climate activists of the Royal Palm International College in Ilorin have inaugurated “Return the Green Club”, an initiative to bring awareness on the need to save the environment from depleting.
The Tide source reports that the Return the Green Club is part of the activities to mark the 2021 World Environment Day, themed: “Restoration of the ecosystem”.
The children are Aderinsola Adegboye, 10 years old; Adenrele Adegboye, 11; Mariam Abdulrazaq, 12; and Chibuzor Oseigbu, 16.
Adegboye, Founder of “Return the Green” initiative, observed that government from nations have agreed to limit global warming by reducing carbon emission in areas like energy and transportation.
She warned that globally, the world has started experiencing changes due to climate change.
Adegboye advised that to cope with the climate change that is taking its toll on the environment, drought resistant crops and trees should be planted.
She also advised Nigerians to build houses and roads above sea level and use of technology to be innovative about irrigation method.
Adegboye listed actions to reduce causes of climate change to include using renewable energy, cooking clean, and reduce re-use and recycle, among others.
Miss Chibuzor Oseigbu listed causes of climate change to include deforestation, burning of fossil fuel and agriculture as a major cause of source of greenhouse gases which contribute to the green house effect and climate change.
She also observed that sometimes natural climate change happened naturally through volcanic eruptions, ocean currents and earth orbital changes, among others.
Miss Mariam Abdulquadir, in her presentation, explained that World Environment Day is United Nation’s principal vehicle for encouraging children and adults, educated and uneducated, rural and urban dwellers, to be worldwide on the awareness and action for the environment.
On his part, Master Adenrele Adegboye, advised school children to fight climate change through provision of bird feeders to provide shelter for birds, use of snack paper bag, compost making and making short videos on climate change and posting.
Also speaking, Mr AbdulGaniyu Opeloyeru, the Executive Director of Ajike Foundation of the Kwara First Lady, Mrs Olufolake AbdulRazaq, commended the children for the initiative.
He observed that such initiative would promote awareness on dangers of ill treatment of the environment and the need to protect it.
Opeloyeru advocated taking such awareness to mosques, churches, opinion and community leaders so as to preach the importance of ecosystem.
Earlier in her address of welcome, Mrs Funmi Adefila-Osiegbu, founder of Bundies Care Support Initiative, noted that human relationship with nature is broken.
“These crises stemmed from the unhealthy practices we have adopted as occupants of our planet,” she said.
According to her, many have been lost to various diseases and infections, from the recent COVID-19 to Ebola, Lassa fever and Zika virus, among others.
Oseigbu expressed optimism that the Return the Green initiative would become national and global, adding that it is time to be action driven towards restoration and preservation of the environment.
On her part, Mrs Remilekun Bamigboye, the  state Commissioner for Environment, noted that climate change issues had been left unattended to and now threatening human existence.
She urged the younger generation to champion the cause of the environment so as to have a safe world to live in.

The Conservator General, National Park Service, Dr Ibrahim Goni, says there is no more room for illegal wildlife trade in the country as offenders will be prosecuted.
Goni, made this known in Abuja when the Nigerian Agricultural Quarantine Service (NAQS) handed over a confiscated parrot to the parks service for keeps and management.
He noted that the confiscation of the bird and its hand-over to the park’s management was a welcomed development, adding that Nigeria would continue to fight against wildlife trafficking.
Goni said Nigeria had been accused by the Convention on International Trade in Endangered Species of Wild Fauna and Flora (CITES) as a transit root and source of illegal animal trafficking.
“This has given our country a bad name. We are here to redeem that image. Mr President in 2016 reviewed the CITES Act for this reason.
“Based on the Act, most agencies like the National Park Service, NAQS, National Environmental Standard and Regulations Enforcement Agency (NESREA)  and the Department of Forestry in the Ministry of Environment were given additional powers.
“This has made us to work as a team and as a result led to the confiscation of the parrot,’’ he said.
he further said that in the convention Act, the parrot was clearly stated as an endangered bird and must be protected.
“Parrots are beneficial to man in several ways as they serve as stress buster due to their talking nature and help in guarding in homes.
“When well-trained, parrot would be able to pass information to the owner of the house especially if a trespasser comes around.
“A parrot can also tell time about one’s environment. It is highly trafficked because the feathers and inner organs serve as medicine,’’ he said.
Dr Vincent Isegbe, Director General, NAQS, also noted that one of his organisation’s  mandate was‘ to track the in and out of illegal animals’.
Isegbe, who was represented by Dr Yunisa Dakat of NAQS, said that the confiscated parrot was arrested and detained in Lagos for lack of document.
“If our officers discover you don’t have the right documents attached to the animal to travel with, they will confiscate the animal.
“This parrot was seized at the Murtala Muhammed International Airport in Lagos. The people don’t have the document of the bird so we confiscated it and brought it to the parks for keeps,’’ he said.
Also, Yohanna Saidu, Wildlife Conservation Service, commended NAQS for doing its job and taking the pain to move the parrot from Lagos to Abuja for proper management.
According to him, such gesture and collaboration among relevant agencies would help Nigeria to redeem her image globally.
Dr Muhtari Aminu-Kano, Director-General, Nigerian Conservation Foundation (NCF), said the gesture showed that government enforcement agencies were working.
“It sent a message to the would be perpetrators that they will be caught and prosecuted. It will reduce wildlife crime in the nation.
“CITES is an international treaty drawn up in 1973 to protect wildlife against over-exploitation.
“It also has the mandate to prevent international trade from threatening species with extinction. Endangered species is a species of animal or plant that is seriously at risk of extinction,” he said.