The Scrap Dealers Association has petitioned the Inspector General of Police (IGP) to fish out the policemen that killed a member of the association, Mr. Chima Onyeogaziri, at Eleme Junction in Port Harcourt, the Rivers State capital last week.

The Tide learnt that Onyeogari (30) from Ogborugiri in Isiala Mbano Local Government Area of Imo State was having lunch when he was hit by a bullet allegedly fired by a trigger-happy policeman, who had been identified as Yahaya Mohammed after an argument with a truck driver.

It was revealed that trouble started when a team of three policemen trailed and blocked a truck loaded with iron scraps to the main gate of the popular scrap dump at Eleme Junction in Eleme local government area of Rivers state.

The policemen, according to the Chairman of Scrap Dealers Association in Port Harcourt, Mr. Uche Onyegbule, had requested the receipt of the scraps loaded at the back of the truck be provided.

Onyegbule told journalists in Port Harcourt yesterday that the policemen immediately ordered that the truck follow them to Elelenwo Police Station after the receipt of the scraps was shown to them.

He said, “the driver pleaded with them to allow him to move away from the gate and park the truck by the side of the road. One of the policemen identified as Yahaya Mohammed started shooting sporadically.

Onyegbule called on the police to ensure that justice was done in the matter, adding that their brother and member of the association must not die in vain.

Commenting on the matter, the President of Mbano Brothers’ Youth Association, Mr. Ignatius Unachukwu, said the deceased would have been alive if the police were prompt in rushing him and the driver to the hospital.

Unachukwu explained that the doctors at one of the hospitals where the Onyeogaziri was first taken to by his friends rejected the deceased before he was taken to the police station at Elelenwo.

According to Unachukwu, “the police officers tried to take them to another hospital, but Chima (Onyeogaziri) died on the way. We don’t want the matter to be swept under the carpet. If the policemen did not run away after the incident and rushed Chima to the hospital, he would not have died.”

Speaking on the incident, the State Police Public Relations Officer, Mr. Ahmad Mohammad, said investigation into the matter was ongoing.

Mohammad, who disclosed that members of the patrol team that went on the operation had been picked up, promised that justice would be done in the matter.

According to him, “All the men that were in the patrol team were arrested. We are assuring that justice must be done in the matter.” 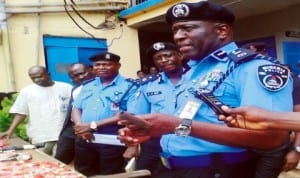 Why They Are Persecuting Rivers Gov –Abe