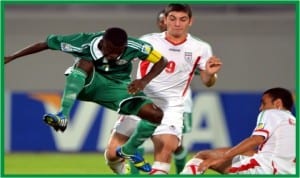 John Mikel Obi is among the Super Eagles players that have arrived Calabar for the November 16 World Cup qualifier against Ethiopia’s Walya Antelopes at the U. J. Esuene Stadium.

The Super Eagles Media Officer, Mr Ben Alaiya, said this yesterday in an interview with newsmen in Calabar.

According to him, flight hitches have delayed some of the invited players who are already in Nigeria from arriving in the Calabar camp of the Super Eagles.

He, however, said alternative arrangements were being made to enable the players connect flights to Calabar from Lagos and Abuja.

“The players who are already in the camp include Mikel Obi, Bright Dike, John Ogu, and James Okwuosa. All the home-based players are in camp.

“It is a normal process that players would not all arrive the camp at the same time, but arrangements are in place to welcome the super eagles today (Tuesday).

“There is no cause for alarm as all the players will arrive camp for the first training session at 4 p.m today, at the U. J Esuene Stadium.

“There is no closing time yet for camping, as some of the players are still being expected for the team to be in full preparation for the match on Saturday,” he said.

Alaiya urged soccer fans to support the Super Eagles, adding that by God’s grace the team would get the ticket for the 2014 World Cup in Brazil.

The Super Eagles had defeated the Ethiopians 2-1 in the first leg of the play-offs in Addis Ababa a fortnight ago.

Meanwhile, coach Stephen Keshi has expressed shock that only 15 out of the 25 invited players turned up for the opening day of training yesterday.

The Super Eagles began preparations for the second leg of their 2014 FIFA World Cup qualifier against Ethiopia at the UJ Esuene Stadium in Calabar, and Keshi was not pleased at the turnout.

“I am not happy at all,” he told newsmen. “We talked about this and everyone was expected to be here today.

“But maybe because of flight issues, some people are not here and it will destabilise our programme.”

With Nosa Igiebor ruled out with injury, Keshi expected to see 24 players in Calabar yesterday afternoon.

And the former captain warned that Wednesday was cut-off date.

“Anybody who is not here by today training, is out,” he said.

The rest included the likes of Victor Moses, Bright Dike, Austin Ejide and Elderson Echiejile, who joined the team at the stadium, where he had a heart to heart talk with Keshi.

Rivers State Governor, NyesomWike, has placed a marching order to accord the necessary support needed to aid the Jewels of Rivers, Rivers Angels FC  qualify from  the  West African Union(WAFU) B and ultimately win the CAF Women’s Champions League Cup.
The Rivers State Commissioner for Sports, Boma Iyaye  disclosed this, Monday, in a press statement signed by the state government’s press officer, Daniel Nwankwoala.
The commissioner commended the team for its victory over Hasaacas Ladies of Ghana in the opening match of their group qualifier, played at the weekend.
He promised to give the necessary support needed, as ordered by the State Governor, to enable the team get the desired results, playing their CAF Women’s  qualifier and win the cup as well.
“The Governor has placed an order to ensure that the team lacks nothing needed,  to help boost their morale, help them perform optimally and aid victory, as they embarked on this maiden competition,”  Iyaye said.
Earlier, head coach of the team, Edwin Okon,  has expressed optimism that his team will perform even better, having prepared adequately for the competition.
“We will fight to the end, my girls will do even better job. I can assure you that, the(players) are  in high spirit and determined to win.
“I am glad that we don’t have injuries worries, so, we are set and ready to do Nigeria proud,” he added.
It would be recalled that the Port Harcourt, Nigeria representatives started  their campaign in the WAFU Zone B qualifier  with a 2-0 win against their Ghana opponents, Hasaacas Ladies on Saturday, to get closer to qualification for the semi-finals.

Minister of Youth and Sports Development, Sunday Dare, has described Elizabeth Anyanacho as a future star.
Anyanacho lost 12-7 to Turkey’s Nur Tatar in the Round of 16 of the women’s 67kg taekwondo event at the 2020 Tokyo Olympics on Monday morning.
Dare, who watched the bout, congratulated the 22-year-old despite the defeat.
“You’ve done well against a world champion. Keep your focus. The world will soon rise to salute you in the near future,” Dare told Anyanacho.
Tidesports source reports that he was also on hand to encourage Edem Offiong, who lost 4-1 in the second round of women’s table tennis to the USA’s Lily Zhang.
“You exhibited strength and talent. Nigeria thank you for making the country proud at the Olympics,” Dare told Offiong.
The pair of Godwin Olofua and Anuoluwapo Opeyori also lost their second Group B match in the men’s doubles badminton event against Denmark’s Kim Astrup and Anders Rasmussen, while Dorcas Adesokan was beaten 2-0 by Spain’s Clara Azurmendi in the opening Group B match of the women’s badminton singles.

We Won’t Give Up On Playing For Nigeria – Ogwumike Sisters

Nneka Ogwumike, Chiney Ogwumike and Elizabeth Williams say they haven’t given up their dream of representing Nigeria in the future after they were denied the opportunity to play for the country women’s basketball team at the Tokyo Games.
The three WNBA stars, who all have American and Nigerian citizenship, would have strengthened D’Tigress squad at the Olympics, but the Court of Arbitration for Sport ruled they were ineligible to represent Nigeria at the moment after having played for the United States.
“I still have a lot of pride and high hopes for the Nigerian team as it is composed now,” Nneka Ogwumike said.
“So, maybe this time around, I won’t be a part of it directly, but I certainly do hope that I can be in the future.”
“I think the fight has just begun,” Chiney Ogwumike said. “I cannot accept to being called a naturalised citizen, when I have full citizenship.
“People don’t know the extent to which my family, and myself in particular, ever since I was at Stanford, has been going back to Nigeria to help. So to have someone say that I am not Nigerian is not fair to my family or my heritage or myself. It just does not feel right at all.”
Williams, who plays for the Atlanta Dream said, “It’s really about the principle now. We’re still going to keep appealing and fighting because I think people need to understand there are a lot of us that have dual citizenship. Even if we grew up here, our households look very different than what people think, and that part of us is very real.