The President of the Christian Association of Nigeria (CAN), Pastor Ayo Oritsejafor,  has disassociated the umbrella Christian body from a group of clergymen that attempted to wade into the political crisis rocking the Peoples Democratic Party (PDP) and its splinter group.

The group of clerics claimed that they were mediating and initiating dialogue among the federal government and the group of seven aggrieved PDP governors and the faction within the ruling party.

The clerics under the name, Niger Delta Bishops and Christian Forum and the South-South Christian Forum have so far met a former Vice-President, Atiku Abubakar, and the Adamawa State Governor, Murtala Nyako, under the guise that they would initiate peace process among the PDP, aggrieved seven governors and President Goodluck Jonathan.

But the CAN President, Oritsejafor, said in an interview that the two bodies-the Niger Delta Bishops and Christian Forum and the South South Christian Forum-are not known to CAN or recognised by the Christian body.

According to Oritsejafor, “We have heard about them and their exploits, meeting various politicians and promising to mediate and initiate dialogue between the PDP and their members.

“We are a Christian body; we don’t involve ourselves in the internal affairs of political parties, let alone mediating between PDP and its crisis.

CAN is apolitical. Honestly, we don’t know them. Their activities are worrisome and I as the President of the Christian umbrella body in Nigeria, CAN, wish to plead and admonish politicians to beware of the characters of some Nigerians who use the name of Christians in Nigeria to do all sorts of things.

“They should be careful with some groups that use the name of CAN to commit several atrocities and fraudulent activities. What type of mediation would the so called Niger Delta Bishops and Christian Forum provide? I am the President of CAN and I can inform you that we are not aware of them.”

Also, a search and inquiry at the Corporate Affairs Commission (CAC) proved that the groups were not a registered entity. According to a statement on behalf of the Registrar-General by Aisha T. Tijani that the commission was unable to find evidence of registration of the groups.

CAC in a letter with reference number: RGO/9/Vol.XXXVI/0998 dated November 11, 2013, was reacting to the inquiry by the chamber of Oludotum Sowemimo and Associates that “pursuant to our enquiry, we were duly informed that there was no data or information on these associations on their (CAC) data base to confirm them being registered under part c’(incorporated trustees).  “Furthermore, we have also written to them to confirm in writing the legal status or otherwise of the organisations.” 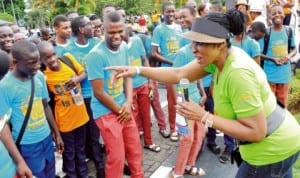 Wife of Cross River Governor, Mrs Obioma Imoke, speaking to youths during the commemoration of the International Day of the Girl Child in Calabar, recently. Photo: NAN