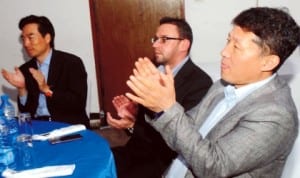 RSUSTStudents of
the Rivers State University of Science and Technology (RSUST) Nkpolu, have attributed the academic growth in the university to the current e-educational system going on in the campus.
They said that before the advent of the e-educational system, students suffered a level of hardship in the hands of some lecturers in the name of “sorting” and other illegalities.
Speaking with our reporter at the campus last Wednesday, Minimah Ruth, said now, students can access themselves after each examination or test as the information Technology Centre (ITC) in the school has the exact record of each student.
She said unlike before, lecturers as well as non academic staff  no longer intimidate and harass students, especially the female ones in a bid to upgrade their scores.
Minimah recalled how female students in Secretarial administration department. Secretarial Administration Department had several carry-over courses due to their inability to compromise and satisfy male lecturers.
Another student, Ken Nakia,  in  said that one of the best achievements of the Prof Fakae’s administration, was the introduction of the IT marking and grading system.
He said that students on countless times, had repeated courses they even passed, due to missing script claims by some of the university teachers.
Nakia, who spoke bitterly about the dark days in RSUST, called on the state government to provide more funds for the school to enable it operate full digital system in all Faculties and Departments.
Recounting the benefits of the e-system, he pointed out that the outcome of post UTME Test of the school, had proved that some students could still perform better without cheating.
Others whose names were not taken, maintained that full digital system would bring out the best in the students.
They were of the view that the system, would spur the students to action as they might not have access to their lecturers in an attempt to upgrade their scores.
When asked who was to be blamed on the issue of sorting, one Lucky Olu, said students, hinting that some female students were “experts” in throwing themselves at the lecturers.
It would be recalled that the Vice Chancellor of RSUST, Prof Barineme .B. Fakae, had introduced e. educational system in the university in his drive to take the school to a world-class standard.