Traditional rulers in Ogba ethnic nationality have pledged their loyalty to the Rivers State Governor, Rt. Hon. Chibuike Rotimi Amaechi and also dissociated themselves from recent media  publications, especially in the (Nation of Thursday, October 31, 2013) “Stop this Madness on the Oba, Omoku Council of Traditional Rulers and Chiefs Warns Governor Rotimi Amaechi”.
The traditional rulers of Omoku, Egi, Usomini and Igburu clans in the Ogba-Egbema-Ndoni Local Government Area of Rivers State condemned all statements contained in the said publications and the antics of the faceless persons who claimed to be “Omoku Council of Chiefs”.
Reacting to the comments, the Eze Ali Agburu 1 of Ogba Land, Chief George Nwoko commended Governor Amaechi for boldly fighting militancy and kidnap kingpins who incidentally found solace in Ogbaland and eventually turned it into a jungle of desperadoes and human hunters that threatened the existing peace and security in the area.
Nwoko also said, in any civilized society and established democratic setting, it was wrong for traditional rulers, who are known as custodians of the people culture and tradition to steer clear of politics.
He particularly thanked Governor Amaechi for including Ogbaland in his infrastructural development agenda in the education, health, power and other sectors.
On his part, the Eze Ohali, Eze Ogba-Buruzorchi of Ogbaland, Eze Chamberline Moses Igwe said, the people of his kingdom will forever remain grateful to Governor Amaechi for effecting changes that Rivers people can see and remain hopeful for a brighter future for the youths of Rivers State.
The Royal father also commended Governor Amaechi for elevating the age-long traditional chieftaincy stool of Eze Ogba-buruzorchi to second class, stating that the political will and commitment of Governor Amaechi in elevating traditional chieftaincy stools is an indication that Amaechi has reverence for elders, chiefs and chiefs and monarchs.
The Eze Egi of Ogbaland, Eze Ogba-Ikwu, His Eminence Sir Dr Kingdom Elemchukwu Elenwa also commended Governor Amaechi for elevating his chieftaincy stool from 2nd class to 1st class, which he said, has reinvigorated his people, who are overwhelmed by the people oriented projects on health, education, power and others put in place by the Amaechi led administration.
“There is no other Governor, since the creation of Rivers State that can be compared to Governor Amaechi, except King Alfred Diette-Spiff.  Our people, including Rivers people have only one task and that is to thank Governor Amaechi and further condemned all malicious publications in the media against Governor Amaechi.
“Our people cannot do that but we are aware that some people could be influencing and sponsoring it to ridicule Governor Amaechi but for us here in Egi land, Usomini and Iguru kingdoms, we will follow Governor Amaechi, he should not be afraid of people who cannot defend their accusations against him face to face. I think those writing against Governor Amaechi are fools,”  Eze Elenwa said.
Also speaking, the traditional monarch of Igburu kingdom, Eze Igburu the third of Ogbaland, Eze Chinedu Nnabugo Igwe urged his colleagues to strongly condemn the blackmail against Governor Amaechi by the faceless individuals who called themselves “Omoku Council of Chiefs”.
Eze Igwe urged Governor Amaechi to disregard the media propaganda and deceit of his political detractors and step up efforts towards actualizing his vision for the State and leadership initiatives that will impact positively on the people. 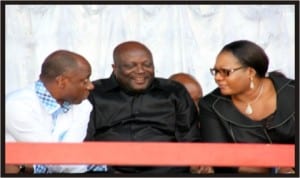