Bayelsa State Governor,
Hon. Seriake Dickson and his deputy Rear Admiral Gboribiogha John Jonah have submitted themselves for the ongoing staff verification and biometric capturing exercise in the state.
The Governor and his deputy including some top government functionaries were captured by the team of experts at the Due Process Office, Yenagoa and were issued certificates as well as Automated Verification Cards, with serial numbers.
Speaking with newsmen shortly after the exercise, Governor Dickson stressed his administration’s resolve to rid the State Government’s payroll of ghost workers so as to plan effectively for its workers
He gave January 2014 as deadline for the ongoing Verification and Biometric Capturing Exercise in the State, warning that any worker not captured would forfeit his or her salary.
According to him, the exercise when completed and fully operational will also enable public servants use the automated verification cards to have access to their salaries, clock in and out from duty as well as tax payment.
.“As you are all aware, this State is on a new course; this State is on the course of doing things properly. And let me call on the public servants of this State to cooperate with the officers conducting this exercise. This exercise means so much to us because we want to, for once and for all, put an end to the syndrome of ghost workers on our payroll.
“We want to be able to identify who our workers are and plan and cater for them. I am happy that the measures that we have put in place since coming on board have yielded some dividends but this appears to be the most scientific way of determining who should be on our payroll. And I want to commend you all. I have heard that you have already verified a few Ministries, Departments and Agencies, so I want to call for cooperation on the part of the public servants that will be verified.
The Governor explained that, though the verification process would continue, he called on all public servants to participate in the verification, as there would be no sacred cows in the exercise.
“No one will be left out; no one should be left out. Everything that has to be done in the verification process must be done, that is the message my Deputy and I are here to send, that nobody is above verification. No connection will stop you from being verified. No level of seniority will stop you from the verification. And verification officers here have our mandate to do everything you need to do, properly and thoroughly,” he said.
He remarked that in due course the exercise would extend to health personnel and teachers especially those in the rural areas as they constitute the bulk of the rot in the public service system.
In his remarks, the Special Adviser to the Governor on Treasury and Accounts, Mr. Timipre Seipulou highlighted the characteristics of the Automated Verification Card and presented the cards to the Governor and his Deputy.
Mr. Seipulou who doubles as Project Director of the Verification and Biometric Data Capturing Committee, noted that the card would capture the physical evidence of the worker, and also grant workers access to certain locations. 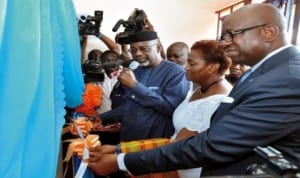