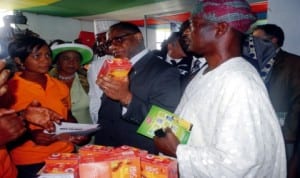 Minister of Trade and Investment, Dr Olusegun Aganga (middle), inspecting a product at one of the exhibition stands, during the opening ceremony of Lagos International Trade Fair in Lagos, last Friday. With him is the representative of the Governor, Mr Wale Raji (right).

The Director-General,
National Automotive Council, Mr. Aminu Jalal, has said that all importers of new vehicles into Nigeria are to pay at least 25 per cent more on tariff.
This, he said, was meant to discourage the importation of fully built unit vehicles.
The move, according to him, is part of measures to develop the Nigerian automotive industry.
The Federal Executive Council had on October 2 approved a new automotive policy that would compel all government agencies and ministries to buy made-in-Nigeria vehicles.
This was also an initiative to encourage vehicle manufacturers to establish production lines/assembly plants in Nigeria.
In a telephone interview with our correspondent on Tuesday, Jalal said Nigeria was on the path of rejoining the league of auto producing countries.
It was learnt that before now, the import tariff differential between FBU and Completely Knocked Down vehicles was about five per cent.
Auto manufacturers had often complained that the gap was too close and made it cheaper to import fully built vehicles than to produce locally.
Jalal said many international automotive manufacturers such as Toyota, Nissan, Renault and GM, had indicated an interest to invest in Nigeria with the announcement of a comprehensive automotive development plan.
He said, “Nissan, Toyota and others are now conducting feasibility studies on vehicle assembly in Nigeria.
“The elements of the plan, which will ensure competitiveness and increase productivity of the sector, are: industrial infrastructure improvements (automotive supplier parks and clusters), skills development, standards, investment promotion, market development and anti-smuggling measures.”
Jalal lamented that the nation was wasting N400bn on the importation of 200,000 used vehicles and 80,000 new ones annually even when it had the capacity to produce 150,000 vehicles, which could fetch a total of N550bn.
He added that the fact that the policy would be subject to periodic reviews would enable the automotive industry to achieve its potential for the Nigerian economy.
He, however, stressed that the policy would not result in the banning of the importation of vehicles.
“At full capacity, the Nigerian automotive industry has the potential to create 70,000 skilled and semi-skilled jobs along with 210,000 indirect jobs in the SMEs that will supply the assembly plants. 490,000 other jobs will also be created in the raw materials supply industries,” he noted.
He said dealers could still clear imported vehicles at the old rates until February 28, 2014, provided “they can prove that they had opened a Letter of Credit for the vehicles before October 3, 2013.”
The Minister of Industry, Trade and Investment, Mr. Olusegun Aganga, had similarly said the new automotive policy would create significant employment and a wide range of technologically advanced manufacturing opportunities.
He said, “In many countries around the world, the automotive industry plays both strategic and catalytic roles in economic development, particularly in employment creation and wealth generation; small and medium enterprises development (as it relates to auto parts components and services); skills development and technology acquisition.”
According to him, this industrial base can then form the foundation for other modern advanced manufacturing activities.
“For example, commercial vehicle production will lead to the manufacture of agricultural, mining and railway equipment, military hardware and transport,” he added.
industrialised.
Many years ago, Nigeria had about 10 functional assembly plants for different categories of vehicles.
Out of the six of the firms that were privatised recently, only four are struggling to keep afloat the murky waters of business.