Governor Peter Obi of
Anambra State last Monday renamed the Anambra State University, after the late Ikemba Nenewi, Chief Chukwuemeka Ojukwu. The university will now be known as the Chukwuemeka Odumegwu Ojukwu University.
The renaming ceremony held at the Igbariam Campus of the university where the state government and family of the late Biafran warlord marked his 80th post humous birthday.
Obi said the decision to rename the university after Ojukwu was informed by the heroic contributions of the deceased to teh Igbo people, insisting that no honour was too much for him.
The governor also annouced teh granting of a subvention of N5 billion and the donation of four security vans to teh university. He also annouced the donation of two buses to the Student’s Union of the institution.
Obi also annouced the increase in the monthly subvention of the university by 15 per cent, starting from January.
The National Chairman of APGA, Sir Victor Umeh, said the renaming of the university and the provision of tools to make it a centre of excellence befitting of Ojukwu’s name, was a right decision.
In another development , President Goodluck Jonathan has assured that the handover of the Power Holding Company of Nigeria (PHCN) is in the best interest of the country.
In his message at the Third Session of the sixth Synod of the Church of Nigeria, Anglican Communion at Ihiagwa, Owerri, in Imo State, he restated the Federal Government’s commitment to improve infrastructure as well as ensure that the power sector performed better than the telecommunications industry.
Represented by the Minister of Labour, Jonathan said the privatisation of the power sector would make electricity sufficient for the nation.
The president also said government was working hard to reposition the railway sub-sector, adding that that trains were already operating on the North-South routes.
“The eastern corridor would soon be resuscitated. We are taking bold steps to tackle the problems of the country and by the grace of God, we will succeed,” he said.
On the proposed national conference, he said he was convening it to enable Nigerians to discuss the issues in the country.
“Let us talk and settle the issue of church burning, bombing, ethnicity and various other problems bedeviling the country. Everyone must be involved,’’ he said.
The Bishop of Egbu Diocese, Rt. Rev. Geoffrey Okorafor, prayed for the president and the nation, and stressed the need for  peace and development. 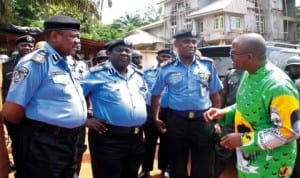